It was a big day for Thangulla Satish, a 45-year-old farmer from Lothunur village in India’s southern state of Telangana. He had toiled hard and prepared his rooster to win the upcoming cockfight championship for him.

But his rooster wasn’t ready for the game. As the match began, it tried to escape the fight ring and accidentally impaled the owner in his groin, killing him.

“Satish died on way to the hospital due to loss of blood,” local police officer B. Jeevan told Zenger News.

“He tried to catch the bird when it was escaping but was struck by an almost three-inch knife attached to the bird’s leg,” said Jeevan.

Satish was among 16 people organizing the cockfight, according to the police officer. 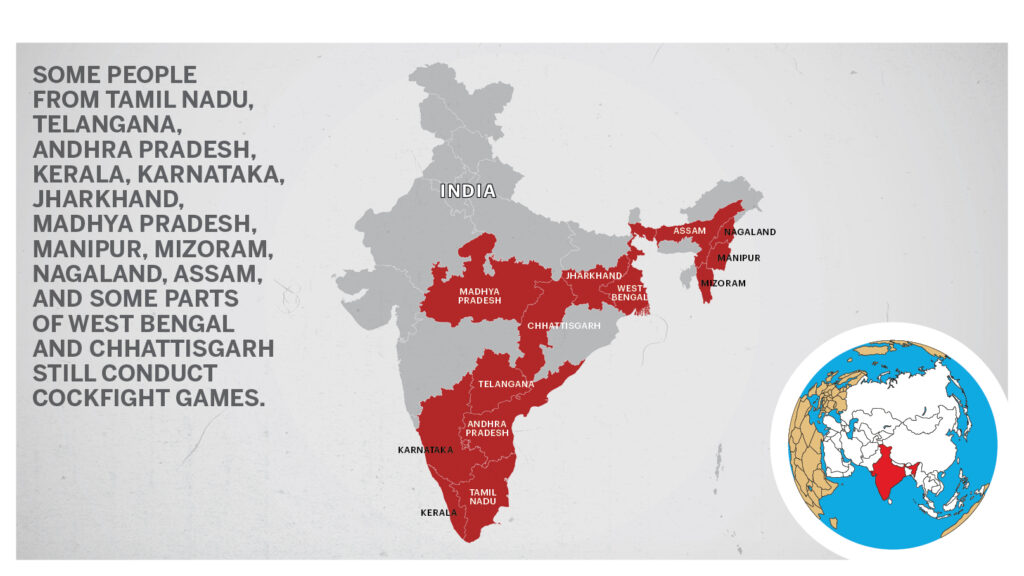 “We are searching for the rest of the organizers. They will face charges of illegal betting, manslaughter, and organizing a cockfight [involving knives],” said Jeevan.

Jeevan said that the punishment for the 15 people will depend on the court hearing.

The bird was held at the local police station for evidence before being taken to a farm.

Cockfighting is a banned activity in India since 1960 after the enactment of the Prevention of Cruelty to Animals Act. But the fines mentioned in the Act haven’t been changed since and stand at a paltry INR 10-100 ($0.13-1.36). This is one of the major reasons that this law has failed to prove a deterrent.

A judgment by the Supreme Court in 2015 banned cockfights and another by the Andhra Pradesh High Court in 2016 upheld the ban. The Supreme Court, in January 2018, dismissed a plea to allow cockfights, and said: “the joint inspection team shall be entitled to enter any premises to seize cocks/roosters which are intended to be set up for cock-fights.”

In 2019, INR 900 crore ($122 million) to INR 1,200 crore ($164 million) was raised as a part of betting related to cockfighting in the state of Andhra Pradesh, according to Beauty Without Cruelty–India, a trust for animal rights.

“In 2019, 200,000 roosters were thrown in the ring; bets ranged from INR 100 to INR 5 lakh, and cockfights continued well after sunset under floodlights. Being illegal, scores of people were arrested and 914 cases were registered in Vijayawada (a city in Andhra Pradesh) alone,” Beauty Without Cruelty–India states.

“The High Court of Judicature at Hyderabad has impleaded at least 17 elected representatives of Andhra Pradesh for the deliberate violation of the ban on cockfighting as well as encouraging gambling and the sale of illicit liquor,” according to a July 26, 2018, post from the Humane Society International India.

Jeevan informs that every year someone gets injured and that’s how the authorities are notified about the fight. Last year, a spectator was killed after he got slashed in the abdomen by a rooster that had razor blades attached to its legs.

In 2017, People for the Ethical Treatment of Animals (PeTA) India filed an FIR against cockfighting event organizers and animal owners.

Khushboo Gupta, chief advocacy officer at PeTA India, says that people who engage in cockfights often cite tradition and culture as a reason behind the event. “But the real allure is often gambling,” she said.

“Somehow a man’s fragile self-worth is pinned on whether his razor enhanced rooster wins the fight,” Gupta said.

“Roosters for the cockfight are raised and trained every year in dingy spaces before the cockfight season begins,” Sonya Gosh, a Delhi-based environmentalist and animal rights activist, said.

Gupta tells that the roosters bred for the cockfights are killed if they are deemed inferior by their owners before a fight.

“Breeders often pluck the birds’ feathers and hack off wattles and/or combs (the flesh at the top of their heads and under their beaks) to prevent other birds from tearing them off in the ring. Since roosters do not have sweat glands, losing these parts deprive them of the ability to cool themselves. Some ‘cockers’ even cut their spurs, which are the natural bony protrusions on the legs so that deadlier weapons can be strapped on,” said Gupta.

In the ring, the fight doesn’t end until one rooster is dead or nearly dead. “Losing birds are often thrown out like rubbish near the game pit, even if they’re still alive,” Gupta said.

“Before the mid-nineteenth century, pigeon flying, cockfighting, and dogfights were favored pastimes of local rulers and early colonial officials. For the Indian elite and the British, these sports served as symbols of power,” a paper from Academia.edu states.

“Thousands of birds are killed as a result of this dangerous gameplay but the fact that the abuse is done on animals doesn’t bother anyone and the authorities don’t take strict actions,” Ghosh said. “Ban on cockfighting is not useful because the implementation on the ground level is loose.”

Jeevan tells that the price of the birds used in the cockfight and the amount of betting changes every year according to the people who organize these events. “Every year before the event, these birds are trained and kept on farms. Local authorities including the police keep a check on these farms, but it is tough to spot this training because people do it in hiding,” the police officer said.

The government has recently come up with a draft to amend the over 60-year-old Prevention of Cruelty to Animals Act. It is considering increasing the penalty substantially and may propose a jail term of five years, too.

Gupta informs that the concern of animal cruelty is growing in the country and with proper implementation of laws on the ground, she is hopeful that the situation can be controlled.