CBS’ decision to air the Grammy Awards earlier than usual didn’t pay off as well as they hoped, though it certainly did enough to give CBS a comfortable edge for Sunday Night viewing. Sunday’s show, which ran three hours and 40 minutes, was the earliest a Grammy 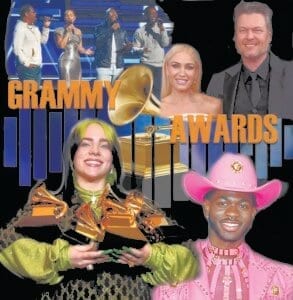 telecast had been presented in seven years. It drew, at least in the preliminary numbers available at press time, 16.54 million viewers and a 4.7 rating among adults 18-49 in the fast national ratings. These are the earliest — and least accurate — figures available. The adjusted numbers are reported later in the week, and include other things such as DVR and time shifting data. The early  numbers are down about eight percent, and six percent from the comparable figures for the 2019 awards.

Last year’s ceremony ended up with 19.88 million viewers and a 5.6 in the 18-49 demographic. The small downturn for the Grammys mirrors that of NBC’s Golden Globes broadcast in January: It was down by a slight two percent in viewers and 10 percent in adults 18-49.

However, Sunday’s Grammys broadcast may end up with the show getting its smallest audience since 2008 (17.18 million viewers) or 2009 (19.04 million). The all-time low in viewers came in 2006, when 17 million people tuned in. Most of the networks chose to air reruns opposite the Grammys. There was an ABC News special on the death of NBA legend Kobe Bryant that drew 2.46 million viewers and a 0.5 rating in the 18-49 demographic. NBC’s American Ninja Warrior: USA vs. the World averaged 2.16 million viewers and a 0.4 in adults 18-49. The CW’s Batwoman and Supergirl (both 0.2 in the demo) were both steady.