When retiree Stephen Paddock checked into his 32nd-floor suite at the Mandalay Bay Resort and Casino last Thursday, nothing appeared unusual.

Paddock had booked room 32135, described by Las Vegas Metropolitan Police Department Sheriff Joseph Lombardo as one large suite with uninterrupted views of the Las Vegas Strip.
The former accountant would’ve had a clear view of the Route 91 Harvest festival, a three-day country music event taking place in an open-air, ground-level venue across the Strip, some 400 yards away from his hotel.
On Sunday night, as the crowd of about 22,000 people listened to headliner Jason Aldean below, Paddock smashed two windows of his suite — one in the front and one on the corner — and fired into the crowd, ultimately killing 58 and injuring hundreds of others.
The attack was the deadliest mass shooting in modern US history.
The latest revelation came Tuesday afternoon when police said Paddock set up cameras inside his hotel suite and in the hallway. Police are not aware whether the devices were transmitting — the FBI is investigating their use — but Lombardo told reporters he thinks the shooter might have used them to watch for people approaching his room.

Housekeepers said they “saw no signs of anything” suspicious in the two-room suite, Nevada Rep. Dina Titus told CNN.
Paddock had 23 guns inside the suite, as well as hammers, Assistant Sheriff Todd Fasulo said. The arsenal “was pretty well hidden,” Titus said.
The gunman had brought “in excess of 10” suitcases to his room over several days, Lombardo told reporters Monday. Authorities believe Paddock brought the weapons into the hotel by himself, but they did not provide specifics.
Room 32135, the suite from which Paddock fired, has striking, unobstructed views of the Las Vegas Strip, according to videos from two guests who stayed in the room last year. Windows that nearly stretch to the ceiling wrap around the room. There is a separate bedroom and a living room, which has a bar.
Photos published by the UK’s Daily Mail showed a body purportedly inside Paddock’s hotel room, along with semiautomatic rifles, including one with a scope and a barrel support mount. A stack of magazines and shell casings were seen near the guns. So was a hammer.
Police tape covers the room’s double doors, one of which appears to have been broken down, video of inside the room showed. 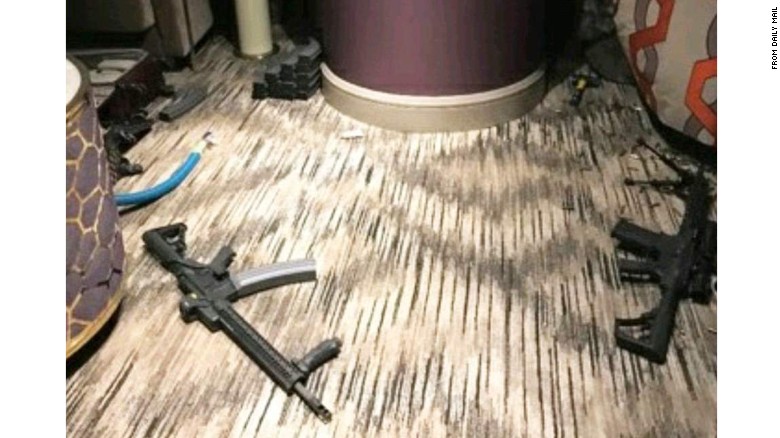 The raid
As the first shots rang out Sunday, first responders realized that the gunfire was raining down on the crowd from a vantage point up high. “It’s coming out a window,” a first responder shouts on dispatch audio obtained by CNN.
Attention soon focused on the Mandalay Bay hotel, several floors up and several hundred feet away. 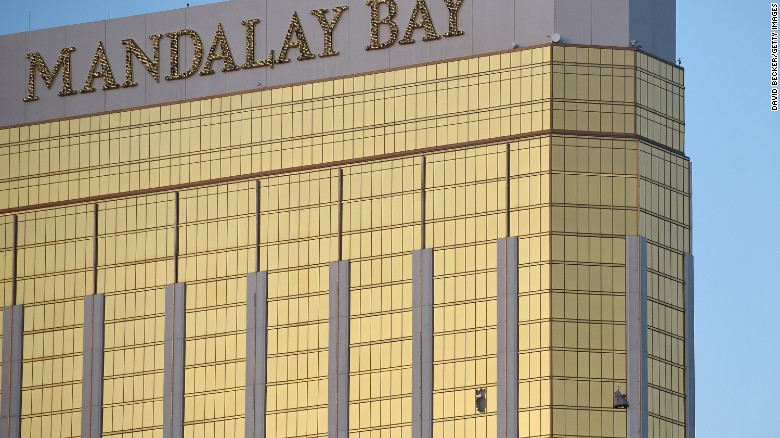 CNN law enforcement analyst Art Roddick said he was struck by the planning that went into the attack.
“Firing from an elevated position is always what you want to do, so I would not be surprised if we have some video of him actually standing in that venue looking up at Mandalay Bay and trying to figure out which room is going to give him the best advantage.
“You can see those windows are knocked out, one in the front and one in the corner, which gave him two different angles to shoot from and that’s all part of this planning,” Roddick said.
The presence of other hotel guests in the rooms surrounding Paddock’s meant that police couldn’t return fire from the ground, he explained.
Police entered the hotel to begin working their way to the shooter’s sniper nest.
“A team of six officers that approached security, they went up the elevators after discussing the situation with the security and obtaining intelligence,” Lombardo said.
“And they checked each floor by floor until they located where they believe to be the room,” the sheriff said.
High up on the hotel’s residential floors, a first responder radioed in: “I’m inside the Mandalay Bay on the 31st floor, I can hear automatic fire coming from one floor ahead… one floor above us.”
“Subsequently they approached the room, received gunfire, they backed off and SWAT responded,” Lombardo said.
Undersheriff Kevin McMahill said once the first responders had “isolated this individual to the two rooms, our SWAT team used the explosive breaching to go in and confront the individual.”
A SWAT officer is heard on police radio: “We need to pop this (door) and see if we get any type of response from this guy. See if he’s in here or if he’s actually moved somewhere else.”
Once inside the room, police found the shooter dead, apparently from a self-inflicted gunshot. Lombardo said police believe Paddock “killed himself prior to our entry.”
The attack was a threat police could not have prepared for, McMahill said.
“These folks were attacked by a man from 32 stories up with automatic rifle fire and so I don’t really know how you plan for that. We just didn’t see it coming.”
Facebook Comments

By Nicole Chavez and Holly Yan All it took was a man and a truck to inflict the deadliest terror attack on New York City since 9/11. A 29-year-old man plowed into a crowd of […]

Brother of man ID’d as Las Vegas shooter: ‘Like an asteroid just fell on top of our family’

By Brett Molina The brother of the man who police say killed at least 58 people and injured about 515 said his family is “dumbfounded” by details of the deadliest mass shooting in modern U.S. history. […]