NEW DELHI — Alikkoya, a 45-year-old fisherman staying on the Lakshadweep island, was heartbroken to see his shed, the only source of livelihood he had, being razed by the authorities in the name of “development”.

India’s smallest Union Territory Lakshadweep, off the coast of the southern state of Kerala, is an archipelago consisting of 36 islands with an area of 32 square kilometers (12 square miles). It has 12 atolls, three reefs, five submerged banks, and 10 inhabited islands.

Although Alikkoya’s petition against the demolition is still pending in the Kerala high court, he is angry at the elected representatives since no one came forward to help him.

His shed was destroyed as per the Coastal Regulation Zone Act, which negates the Supreme Court-appointed committee report giving power to fishers to establish temporary sheds near the sea. 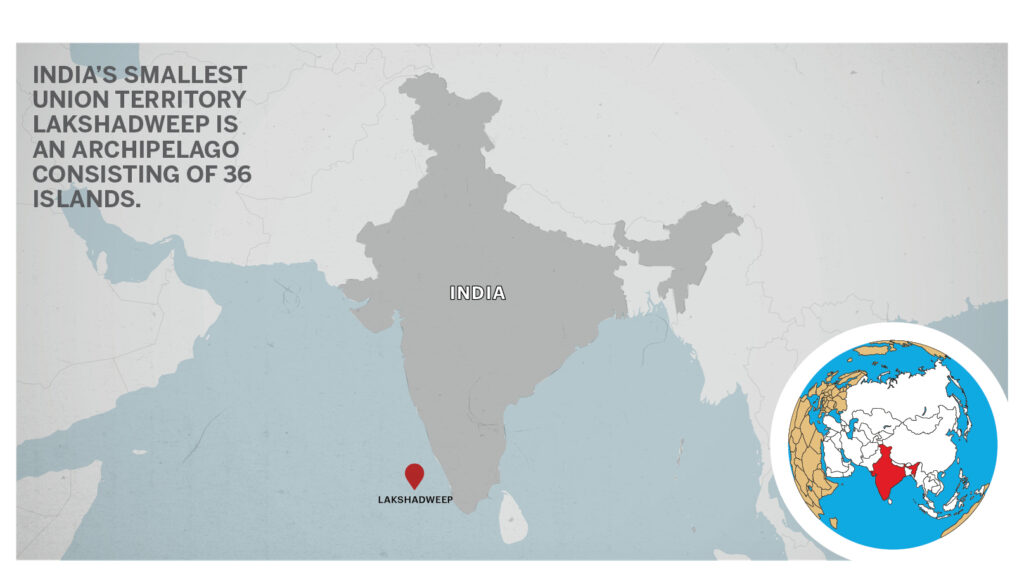 “Where shall we keep our boards, nets. These are the only means of livelihood and sustenance that we have, which were destroyed by the authorities in the middle of the night,” he said in a widely circulated video on Instagram.

Lakshadweep has an approximate population of 65,000 — out of that, 97 percent are Muslims.

The islands’ calm broke after a new administrator, Praful Khoda Patel, a leader from the country’s ruling Bharatiya Janata Party and a former Home Minister of the western state of Gujarat, took over and introduced several draft regulations.

While the administration wants to develop the islands into a Maldives-type tourist destination, locals say new measures were announced without discussions with the populace or any dialogue with the elected leaders.

The new set of regulations include the Goonda Act (a law that allows authorities to keep an accused in jail without bail for a year), Lakshadweep Development Authority Regulation (LDAR), a ban on the sale of beef, and plans to increase the sale of alcohol, among others.

To intensify their voices, the people of Lakshadweep protested underwater and also held a 12-hour hunger strike against the administration. People also protested outside their houses by holding placards with slogans like “Save Lakshadweep, Save Democracy” and “Justice for Lakshadweep”.

The most contentious among all initiatives is the LDAR, which gives power to the authorities to take over any land that it deems fit in the name of development.

Muneer Manikfan, the vice-chairperson of the Minicoy Panchayat, believes the law was not introduced for furthering any real development but is a strategic move to evict locals from the land on which they have been living for years.

“LDAR is the main threat because any regulation related to the land and the people should be beneficial for them,” Manikfan told Zenger News.

He also said that any decision related to land development should be taken in consultation with the communities at the grassroots level. However, no such discussion took place, and the regulations were imposed in a draconian manner.

Last year, in a meeting chaired by Indian Prime Minister Narendra Modi, a decision regarding an amendment to Land Revenue and Tenancy Regulation, 1965, was taken according to which occupancy rights were given to the Scheduled Tribe community of the Laccadive, Minicoy, and Amindivi islands (the habitable islands).

However, if the new regulations get implemented, any land coming under the “planning area” as notified by the government will be taken away for development.

Another draft proposal termed the Goonda Act or Prevention of Anti-Social Activities Act was introduced on Jan. 28, 2021. The draft gives power to the authorities to arrest anyone without trial for up to one year to maintain public order.

Goonda is a Hindi term that means hired goon.

According to the data provided by India’s National Crimes Record Bureau, Lakshadweep has exhibited the lowest crime rates. In the light of this, the enforcement of such a draconian law in this area appears suspect.

“It is evident what their intentions are. If you protest, you will be in jail, is the main motive of introducing Goonda act,” M. Noushad, an editorial member of the online portal Dweepdiary, told Zenger News.

He said that in February, as the drafts of the regulations started coming in, few articles on their website criticizing the policies were taken down.

“There was a simple template saying that as per the instructions of the ministry of broadcasting, this news has been blocked,” he said.

Although the links were restored after a few hours, he believes the incident highlights the “arbitrary” and the “undemocratic” way the administration will most likely operate once the new laws kick in.

Mohammad Reyaz, who lives in Androth island and is doing his bachelors from Bengaluru, told Zenger News the Goonda act is absurd in an area where there is a negligible crime.

“Last year, when anti-Citizenship (Amendment) Act protests were taking place, the new administrator put everyone who was protesting behind bars,” Reyaz said. “Now, if the Goonda Act is implemented, the administration will work authoritatively. It will no more be a democratic place.”

Lakshadweep is an area where there is a negligible presence of mainland newspapers or traditional media. Apart from a magazine published by the government, there is no other way for news to be relayed from the island.

“The internet is weak and very sparse. In certain islands like Minicoy and Sitan, you have to depend on SMS to inform people. The majority of the population cannot access news,” Noushad said.

Lakshadweep falls in an eco-sensitive area with protected coral reefs. However, the draft proposals talk about the construction of highways, canals, railways.

Mohammed Faisal, Member of Parliament from Lakshadweep, told Zenger News that a thorough scientific study should be done before deciding on any development activity.

“The people of Lakshadweep are not against any form of development, but it should be inclusive and after thorough consultation with the elected representatives,” he said.

Manikfan questioned the need to widen roads in the area with minimal traffic and almost negligible presence of four-wheelers.

However, Rakesh Sinha, a Bharatiya Janata Party leader, rubbished all allegations made by the locals.

“The government of India is committed to the development of Lakshadweep because they have a very rich heritage, which is unrealized by the local people,” he told Zenger News.

He said that the majority of the population in Lakshadweep is poor, and the development proposals given by the administration will boost tourism, which in turn will help the people of Lakshadweep.

If the draft Lakshadweep Panchayat Regulation comes into effect, it will bar people having more than two children from contesting the panchayat elections.

The local bodies in 2012 achieved little power in the decision-making process of matters related to health care, agriculture, education, animal husbandry, and fisheries.

“The main reason behind attempts to take away the power of elected panchayat members is to disallow locals from taking part in any decision-making process,” Manikfan said.

Omesh Saigal, former administrator of Lakshadweep, in a letter to Home Minister Amit Shah, pointed out that the closing of anganwadis (rural healthcare workers), sacking of dozens of employees, amending Panchayati Raj rules without due consultations are discriminatory.

He said some amendments are laughable and not suited for an island like Lakshadweep but picked up from a city like Delhi.

Ban on beef and promotion of alcohol

The draft Lakshadweep Animal Preservation Regulation proposes strict regulation on selling, transporting, and buying beef products, with imprisonment of up to 10 years for those who violate the law.

Further, there are proposals to lift the ban on the sale of alcohol to promote tourism.

However, Faisal believes that this legislation was introduced to divert attention from the larger political objectives of the government.

“In Manipur, Mizoram, Goa where the Bharatiya Janata Party is ruling, why don’t they ban beef there?” he told Zenger News. “For hundreds of years, we have been eating it [beef] as a staple. Why do they want to violate our constitutional right.”

On the question of banning beef, Sinha said: “Respecting the traditions of others and self-censoring in food is not going to harm them. This is not an attack on people’s life, culture or tradition.”