PERTH, Australia — West Australians face the prospect of an extended period of mask-wearing as the state seeks to avoid another coronavirus lockdown.

West Australia Premier Mark McGowan on May 2 confirmed no new locally acquired cases had been detected, 24 hours after a hotel quarantine security guard and two of his housemates tested positive.

Contact tracers are continuing to work through the movements of the three men but all 16 close contacts identified by Western Australia Health as “high risk” have returned negative tests.

Results are pending for a further four close contacts, while another 136 contacts are deemed casual or yet to be classified. 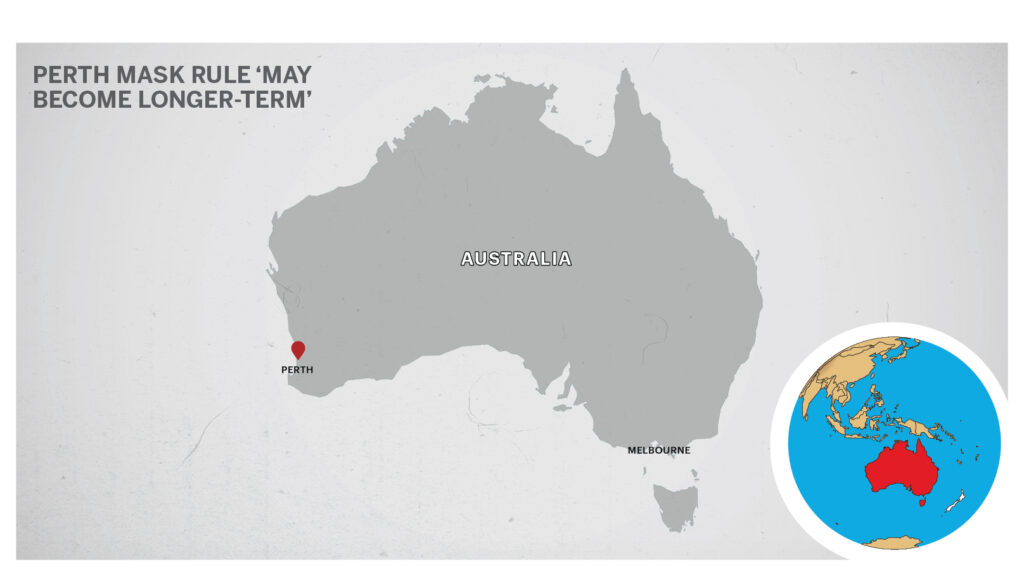 The Australian Football League held on May 2, the derby between West Coast and Fremantle at Optus Stadium was played behind closed doors, nightclubs were closed and Perth and Peel residents were ordered to return to wearing masks indoors and outdoors.

“We could see masks become a longer-term measure in coming weeks,” the premier said. “And that is unfortunate because I know how uncomfortable and difficult it is but that may be one of the measures that we put in place to provide additional protection.”

McGowan and Health Minister Roger Cook will on May 3 each receive their first doses of the AstraZeneca vaccine.

They are part of the over-50s cohort who are now eligible to receive their jabs at one of several mass vaccination clinics across Perth.

“I would just encourage everyone to get vaccinated when your turn comes,” McGowan said.

The guard and his seven housemates, along with their close contacts, have been moved to a hotel for quarantining.

It emerged that one of the two infected housemates — who each worked as delivery drivers — had attended a cooking school on April 27 and 28 with about 20 other people at the Perth College of Business and Technology.

The other students are being contacted and advised to isolate until they return negative tests.

Health advice suggested the risk of their food delivery jobs was low given they were required to wear face masks and had minimal contact with customers.

The guard in his 20s worked at the Pan Pacific Hotel between April 24 and 26 and tested positive on May 1.

On his days off work from April 27 to 30, he moved through the community going shopping, seeing friends and visiting Mirrabooka Mosque.

Restrictions had been in place in Perth and Peel following a snap three-day lockdown.

“Had what happened in the last couple of days occurred three weeks ago, we would have gone into lockdown immediately,” McGowan said.