NASHVILLE, TN — At the request of Mayor John Cooper, the Metro Nashville Police Department (MNPD) has strengthened its policies to explicitly prohibit the use of chokeholds and to further clarify officers’ duty to intervene in 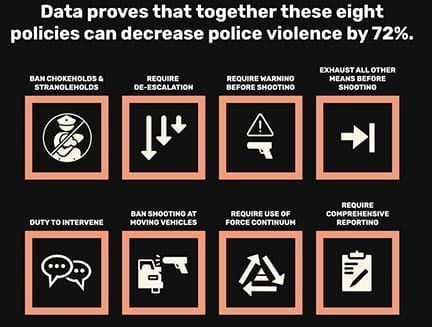 scenarios where excessive force is potentially being used.

“Our police department embraces the principles put forward in #8cantwait, as reflected in a policy comparison we completed late last week,” said Chief Steve Anderson. “We will continue to review, improve and strengthen the policies that guide our officers.”

Chokeholds are prohibited by Tennessee state law under most circumstances. Because MNPD does not train on the technique, chokeholds are not allowed per Nashville police policy and have not been allowed for decades. The police department has now clarified and strengthened this prohibition in an updated policy bulletin that has been disseminated to all officers.

In another bulletin, the MNPD has clarified and reinforced to all officers their obligation to intervene if they observe any MNPD member engaged in an improper or unlawful act, including excessive force, abuses of process, abuses of authority, or violations of department policies.

“Today we take the important step of MNPD clarifying and strengthening its prohibition on chokeholds and its duty to intervene policies,” said Mayor Cooper. “These actions are important for our city, and they are two clear next steps. As part of the My Brother’s Keeper pledge, we will engage the community and assemble a committee to review all use of force protocols and policies.”

Last week, Mayor Cooper announced that Nashville was committing to President Obama’s Mayors’ Pledge to engage the community and address use of force policies. At the request of Mayor Cooper, the MNPD has also undertaken a review of policies and procedures in response to the #8cantwait national campaign. The Mayor has asked the Metro Nashville Community Oversight Board to independently review MNPD’s use of force policies and national best practices.

The entire MNPD manual is on-line for public view at: https://www.nashville.gov/Police-Department/Department-Manual.aspx,