By Paul Vercammen and Faith Karimi

After serving nine years for a Las Vegas kidnapping and armed robbery, an upbeat O.J. Simpson walked out of a Nevada prison with little fanfare early Sunday to start a new life as a parolee.

The former NFL star left prison shortly after midnight local time, and was picked up by a friend, according to Brooke Keast , a spokeswoman for the Nevada Department of Corrections.
“I told him, ‘Don’t come back,’ and he responded, ‘I don’t intend to,’ ” she said. “He was upbeat, personable and seemed happy to get on with his life.”
Unlike previous instances, where controversy followed wherever he went, Simpson was released in the middle of the night to avoid media attention.
“Our biggest concern was our safety and the public’s safety and not wanting anybody, paparazzi, to follow him,” Keast said. “He left through a big blue door through the front gatehouse and exited quietly. He looked down because he didn’t want to be photographed.”

Before his release, prison officials did an inventory of what he wanted to take with him or leave behind. He walked out of prison with paperwork and “three or four boxes about the size of a microwave,” according to Keast. 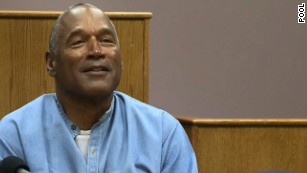 Inside the boxes were items such as a hot plate, clothing and shower shoes, she said.
Simpson also met with one person who’ll become a fixture in his after-prison life: his parole officer.
“They went over what he needs for parole and where he needs to check in, what he should do to get a driver’s license, et cetera (and) instructions on what to do once he’s out there,” Keast said.

‘He’s not going to hide’

The Nevada Board of Parole Commissioners voted unanimously in July to release Simpson after he served nine years of a 33-year sentence for armed robbery and kidnapping.
During that robbery in 2007, he was part of a group that raided a hotel and casino to steal sports memorabilia at gunpoint. Simpson, a former player for the Buffalo Bills, said the items belonged to him.
Now that he’s out of prison, those who know him are not expecting him to become a recluse. 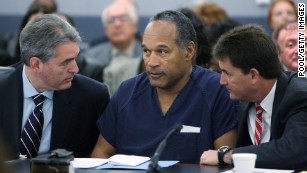 “He’s not going to hide,” said longtime friend Tom Scotto, who attended Simpson’s parole hearing this summer.
Simpson plans to move to Florida later. But for now, he’ll live in a gated residence with unspecified friends in a wealthy Las Vegas suburb, several associates told CNN.
“He’s going to focus on kids, friends, his family and golf,” Scotto said. “Maybe not the first day or second, but he is going to go out.”
Simpson’s children live in various states, with two in the Tampa Bay area in Florida, one in Los Angeles and another in Georgia.
Florida Attorney General Pam Bondi wrote a letter to Florida’s Department of Corrections on Friday saying she did not want Simpson to move to her state and asking them to “notify all appropriate authorities of the State of Nevada that the State of Florida objects to the granting of such permission.”
But Simpson lawyer Malcolm LaVergne lambasted Bondi over the letter, accusing her of exploiting the issue to score political points ahead of elections.
“One hundred percent Mr. Simpson will be able to move to Florida,” he said Sunday. “She doesn’t have jurisdiction over his move.”
But Shawn Arruti, spokesman for Nevada Parole and Probation, said it’s not a sure thing.
“Interstate compact is not a guaranteed thing,” he said after Simpson’s parole hearing in July, referring to an agreement between two states. “Interstate compact is a privilege, but it’s a privilege based on meeting certain criteria. And Florida, when they do their investigation, they’ll make the determination of whether or not they’re going to be willing to accept his case. “

No drugs, no alcohol

As a parolee, Simpson will have to meet a number of conditions set by the Nevada parole board.
While out of prison, he won’t have the liberty to consume alcohol in large quantities or hang out with ex-convicts. The Nevada parole board forbids parolees from associating with convicted felons and people who engage in criminal activity, or possessing guns and drugs. Alcohol abuse can get a parolee hauled back to prison.
“You are permitted to consume alcoholic beverages but not in excess,” the conditions of parole supervision read. “You shall submit to a medically recognized test for blood/breath content. Test results of .08 alcohol or higher shall be sufficient proof of excess.”
Simpson received a bad score on his parole risk assessment guideline in the drug/alcohol abuse category, with the document citing him for “frequent abuse, serious disruption of functioning.”
He testified that he had been drinking alcohol the day of the raid on memorabilia dealers that led to his arrest and conviction. 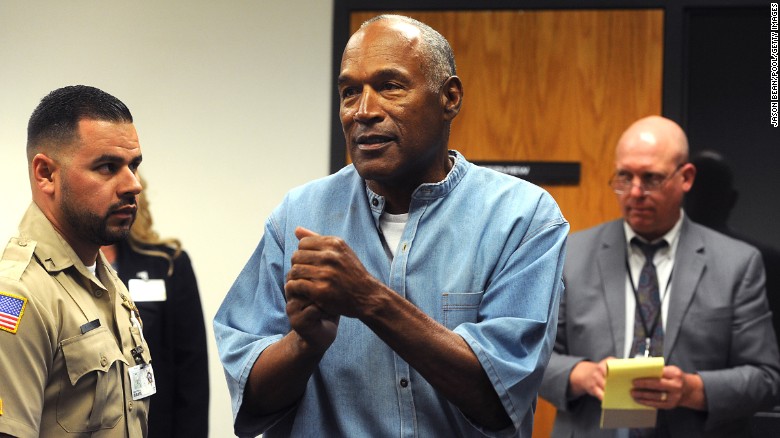 From NFL star to murder suspect
Simpson spent a lifetime in the limelight — first for his athletic prowess, charm and good looks, then as a murder suspect in the 1994 killing of his ex-wife, Nicole Brown Simpson, and her friend, Ron Goldman.
His murder trial in Los Angeles was dubbed “the trial of the century” and sparked years of debate over race and justice.
Simpson pleaded “100% not guilty” and assembled a team of famous local and national lawyers. He was eventually acquitted in 1995, but many questioned whether he got away with murder.
The victims’ families filed a suit for wrongful death. Two years after his acquittal, he was ordered to pay $33.5 million in damages.
Facebook Comments

At least 26 people killed in shooting at Texas church

By Dakin Andone, Kaylee Hartung and Darran Simon At least 26 people were killed in Sunday’s church shooting in Sutherland Springs, Texas, Gov. Greg Abbott said at a press conference. About 20 others were wounded, said Freeman Martin, […]