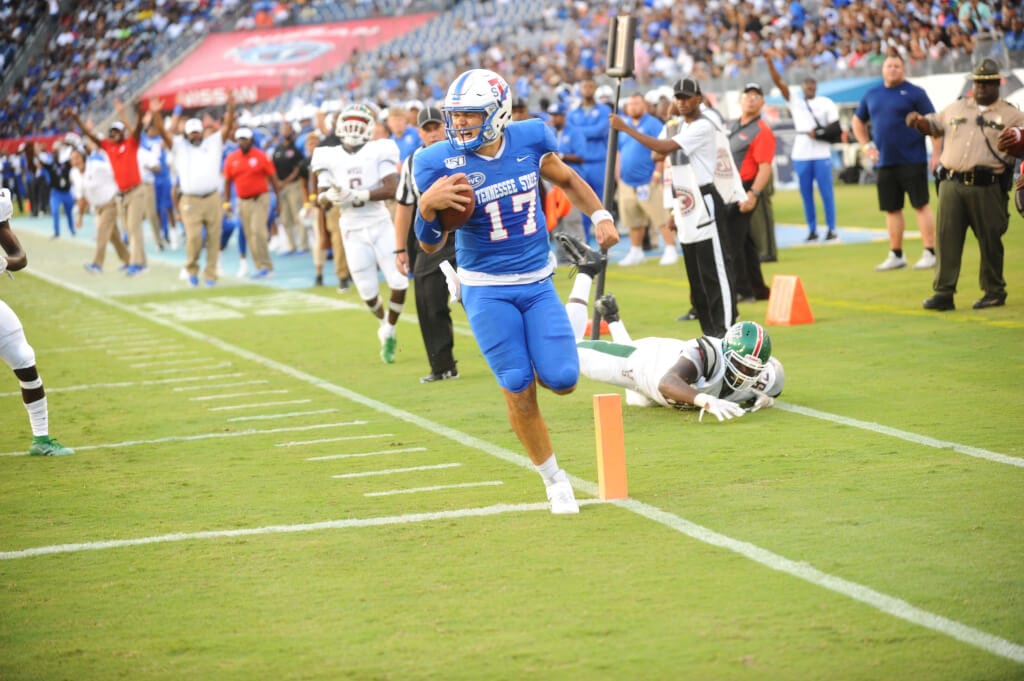 Though it was a bit closer than they probably wanted and things were often sloppy as well, the Tennessee State Tigers opened the 2019 season in good fashion Saturday, defeating Mississippi Valley State 26-20 in the 21st John Merritt Classic at Nissan Stadium. The game also served as the opening salvo in Chris Rowland’s campaign for national honors, and increased attention from NFL scouts. Rowland had 11 receptions for a career-high 173 yards, plus another 61 on seven punt returns and one rush from scrimmage for an impressive 235 total all-purpose yards. He was rightly voted offensive MVP.

The Tigers also spotlighted another candidate for national honors in kicker Antonio Ziva. He had four field goals and a pair of extra points, with his third one being a career-long 44 yards. The kicking game was excellent all round, with punter Kaleb Mosley averaging finished 43.2 yards on five punts. He had both a 64 yarder, and one punt downed inside the 20. Mosley also had six kickoffs for 339 yards, averaging 56.5 yards with one touchback.

QB Cameron Rosendahl at least temporarily put to rest fears about offensive efficiency and consistency. He passed for 330 yards, completing 25 of 42 passes. He also had an eight-yard touchdown run, his first. Te’kendrick Roberson led all rushers with 16 carries for 75 yards. The defensive MVP was Jahsun Bryant, who roamed over the field for nine total tackles, three of them solo. Terry Straughter had seven, 1.5 for losses. The offense outgained Mississippi Valley 447-247, while the defense was holding them to 250 yards in the air and only 42 on the ground. The Tigers averaged nearly six yards per offensive play (5.7) while having 79 offensive plays.

The one trouble area, one that head coach Rod Reed said afterwards “must improve significantly” came in penalties, which was a season-long problem last year. Despite winning every category from time of possession (nearly 35 minutes to 25 for Mississippi Valley) and having 23 first downs to their opponents’15, the Tigers often hurt themselves with 14 penalties for 115 yards. They recognize there’s no way you can be that sloppy against better competition and not pay a heavy price.

The Tigers next travel to Murfreesboro for a game against Middle Tennessee State Saturday.