Flexing its muscles against the city’s tight financial constraints, Metro Council passed a budget in the wee hours Wednesday morning that will increase property taxes by 34%.

Hours of debate on some 30 amendments, most of which failed or were withdrawn, did not sit well with several council members.

“We’ve been here for three hours to figure out how to rob Peter to pay Paul,” said Sharon Hurt. Her amendment to sell the city’s downtown District Energy System failed.

“The way this is working is not working because it doesn’t allow us to have honest conversations with each other,” said Steve Glover. His substitute budget failed.

Russ Pulley’s amendment to eliminate step increases for Metro employees passed but it would allow department heads to give raises to about 2000 Metro employees, including police, through open range pay.

Zulfat Suara succeeded in putting $8.2 million from the school district’s savings into in a contingency fund for teacher raises.

An amendment to eliminate Metro’s $175,000 grant to the Chamber for Commerce failed. Another to take 1% of MNPD and the District Attorney’s budget and redirect it toward social and emotional learning, also failed. Henderson’s wheel tax proposal and her amendment to end corporate tax breaks failed.

Ginny Welsch had two amendments: to redirect funds from the Chamber subsidy towards education and cut the police budget. Both failed.

Although it raised taxes for the first time since 2012, the council did not change anything in the budget process, which Courtney Johnston called “broken”. It didn’t reflect any fundamental change in the city’s priorities either. The mayor thanked Mendes and the council for their leadership. “The crisis budget approved tonight stabilizes Metro’s finances and maintains essential services,” Cooper said. 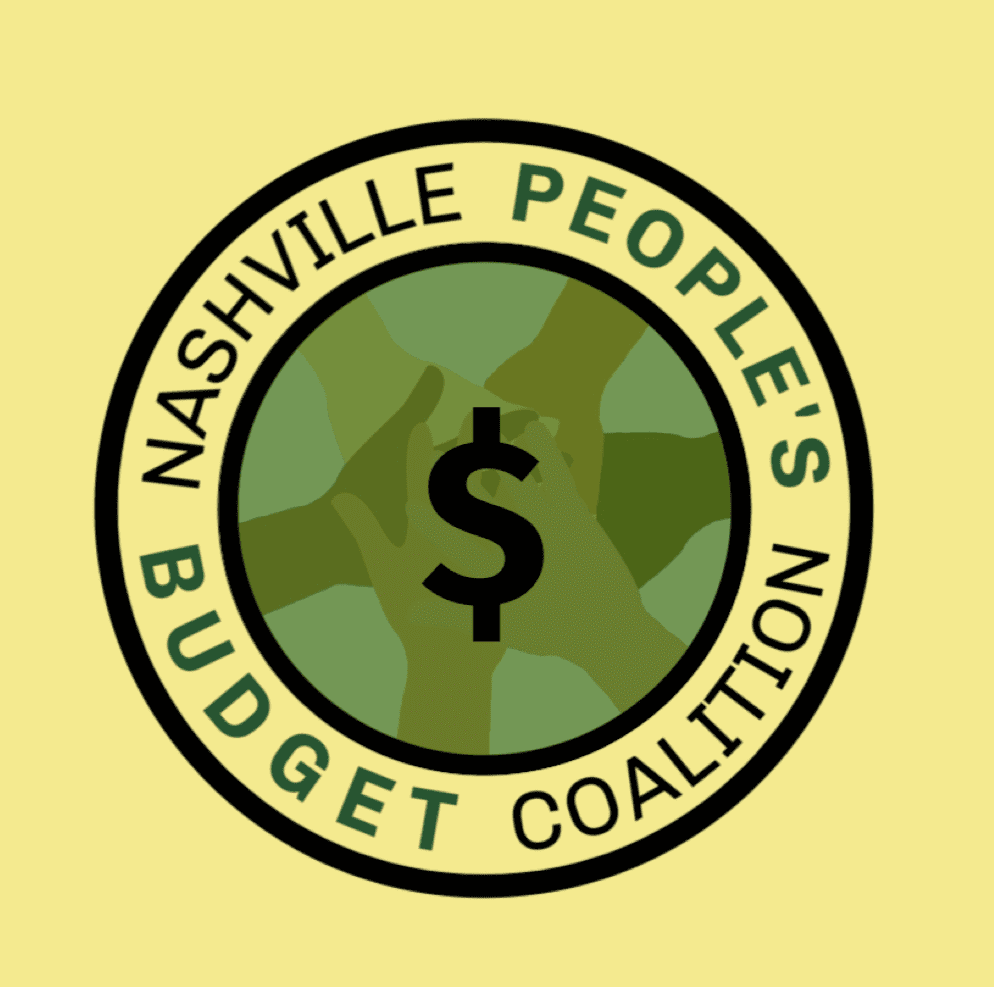 There was another budget that was not submitted to a council vote. The Peoples’ Budget has all kinds of bar graphs and pie charts; it is short and simple, well researched and illustrated in striking yellow, black, and green print with multicolored graphs. It’s Metro’s “Un-budget”—kind of like Alice in Wonderland’s “unbirthday party”. It calls for all the things we should have 364 days a year but don’t. It can be found here: www.nashvillepeoplesbudget.org

“We are calling for sweeping radical fundamental changes to get to the root of the issues,” said Angela Henderson of the Peoples Budget coalition. She said the coalition has a dual organizing model.  “While we invest in our communities we also believe in divesting in policing and cages,” she said.

A crowd of several hundred people gathered on the lawn in front of City Hall before the council meeting Tuesday. Several speakers talked about the need to reimagine a society with less police violence and more opportunity for the young.

Improbable as it is, the Peoples’ Budget is nonetheless an important document because it shows how much money Metro spends on courts, jails, and the police. On Monday, Mayor Cooper implemented a “no choke-holds” police policy. So the coalition has already had an effect even though their budget was never on the table. Of course, all the George Floyd demonstrations had a big influence on the mayor doing the right thing.

Other groups like Nashville Organized for Action and Hope (NOAH) took a different approach. They want the same things but challenged Bob Mendes, pledging him their support provided his budget included a list of their demands. That kind of quid pro quo politics is old school and it helped Mendes pass his budget.

Two Metro Council members, Kathleen Murphy and Dave Rosenberg, are behind an ordinance that has to do with ethics, not budgets, but it could have a profound effect on how the city does its business in coming years. Murphy wrote the bill and Rosenberg amended it. It’s about registering lobbyists and trying to hold them accountable.

District 1 Councilman Jonathan Hall is pro-growth, conservative, and has a solution for Metro’s long-term financial health. He sponsored a bill to impose impact fees on developers. It’s a simple proposal: $1/ft. on residential developments and $2/ft. on commercial projects. The money would have to be paid before developers get their building permits. It could raise millions for things like schools and affordable housing Metro is constantly short-changing. It’s not going to happen without companion legislation passing in the state legislature. Mayor Cooper, sensing easy money, is behind the effort.