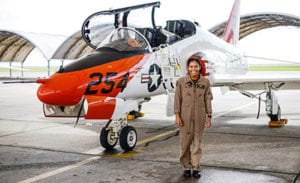 ceremony at Naval Air Station Kingsville in Texas, according to the Navy. Commanding Officer Cmdr. Matthew Maher presented “Wings of Gold” to each of his graduates during the ceremony.

“I’m incredibly proud of Lt. j.g. Swegle and her classmates and am excited to welcome them all to the fleet,” said Chief of Legislative Affairs Rear Adm. Sara Joyner, a career naval aviator who served as a guest speaker for the ceremony via teleconference. “There’s more work to do to make sure that we recruit, train and retain a diverse force that represents the best and brightest of this nation.”

Swegle, a Virginia native who graduated from the U.S. Naval Academy in 2017, became the Navy’s first Black female strike pilot after completing tactical strike training on July 7. A strike pilot flies the Navy’s strike aircraft, including fighter jets like the F/A-18 Super Hornet and the F-35C Joint Strike Fighter, or the EA-18G Growler electronic warfare aircraft. 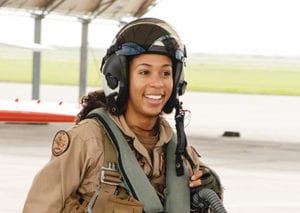 Washington to begin training as an EA-18G Growler pilot. The squadron trains new naval aviators, naval flight officers and naval aircrew in electronic warfare tactics, techniques and procedures in preparation for their fleet assignments, according to the Navy.

“I’m excited to have this opportunity to work harder and fly high performance jet aircraft in the fleet,” Swegle said in a statement. “It would’ve been nice to see someone who looked like me in this role; I never intended to be the first. I hope it’s encouraging to other people.”

Swegle’s groundbreaking accomplishment follows those of other women who have made history in the U.S. Navy, such as Rosemary Mariner, who became the first female jet pilot in 1974, and Brenda Robinson, the first Black woman to become a Navy flight instructor, evaluator and VIP transport pilot in the 1980s, according to the non-profit organization Women in Aviation International.