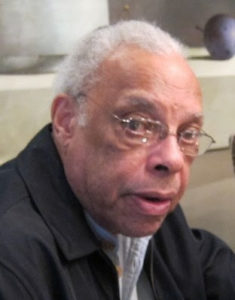 Professor and architect Jeh Vincent Johnson was born on July 8, 1931 in Nashville, Tennessee to Marie Antionette Burgette and Charles Spurgeon Johnson. He graduated from Nashville’s Pearl High School in 1949.  His father, Charles S. Johnson, was President of Fisk University, and his son, Jeh Charles Johnson, was Secretary of Homeland Security Under President Obama from 2013 to 2017.
He received his A.B. degree from Columbia University in New York in 1953 before being drafted to serve in the Counter Intelligence Corps of the U.S. Army until 1954. He then earned his M.A. degree in architecture in 1958 from Columbia University and graduated as class valedictorian.

In 1956, Johnson was hired by Paul R. Williams as a designer. After graduate school, he received the William Kinne Fellows Fellowship and traveled throughout Europe studying architecture. He later joined the architectural firm of Adams and Woodbridge Architects in 1958. In 1962, Johnson co-founded Gindele and Johnson, along with William Gindele, where the focus of their work was on single and multi-family housing, community centers, churches, and schools. Two years later, Johnson accepted a faculty position in architecture and design at Vassar College in Poughkeepsie, New York. In 1967, he was appointed by President Lyndon B. Johnson to serve on the National Commission on Urban Problems. He also served as chair of the National Committee on Housing for the American Institute of Architects (AIA). In Detroit in 1971, Johnson co-founded the National Organization of Minority Architects along with several fellow members of AIA. In 1977, he was elected to the AIA’s college of fellows. Johnson later served as partner at the architectural and design firm of LeGendre, Johnson, McNeil Architects from 1980 to 1990. Johnson’s many architectural projects include the former Poughkeepsie Day School building, the Susan Stein Shiva Theater, the Poughkeepsie Catharine Street Center and Library, and the ALANA Center on the Vassar College campus. He retired from Vassar College in 2001 after thirty-seven years of teaching.

In 1997, Johnson was awarded a special citation from the New York chapter of the AIA for his advocacy on behalf of equal opportunity and housing issues.

“Throughout his nearly four decades at Vassar, Professor Johnson had enormous impact on our campus, the field of architecture, and even national policy,” Bradley said. “He loved Vassar deeply, and with the renaming of the building as the Jeh Vincent Johnson ALANA Cultural Center, we can demonstrate how deeply Vassar loved him in return.”

Alumnae Paula Madison ’74, Lucey Bowen ’68, and Karen Clopton ’80 have collectively pledged a $125,000, one-to-one matching gift to fund updates and enhancements over the next year, including a newly envisioned entrance, new furniture, and other improvements. A naming ceremony will follow completion of the work in fall 2022.
The Jeh Vincent Johnson ALANA Cultural Center, which opened in 1993, was one of several buildings on campus that Johnson designed, and will be the first building on Vassar’s campus named for an African American, President Bradley noted.
“There was unanimous support for this initiative from members of the Board of Trustees, who felt that Professor Johnson’s contributions to the creation and building of the Center and his very presence were foundational to the College’s effort to create a more welcoming space for people of color on campus,” said Board Chair Anthony Friscia ’78.
The Jeh Vincent Johnson ALANA Cultural Center is one stop on a tour of historic buildings that is part of Buildings and Belonging: Mapping the African American Experience at Vassar College since 1861, a project that recognizes the contributions of African Americans at Vassar throughout the College’s history with building markers.
Clopton, who envisioned the Buildings and Belonging project said, “Professor Johnson was inspirational, gracious, and most generous with his time, knowledge, and wisdom.”
In 1967, President Lyndon Johnson appointed him to serve on the National Commission on Urban Problems. He chaired the National Committee on Housing for the American Institute of Architects (AIA) and was awarded a special citation from the AIA’s New York chapter for his advocacy of equal opportunity in the field, his pioneering work on housing issues, and his commitment to maintaining the cultural integrity and social responsibility of the profession of architecture.
Jeh Vincent Johnson and his wife, Norma Edelin Johnson, had two adult children, his daughter the late Marguerite Marie Johnson and Jeh Charles Johnson, former Secretary of Homeland Security  ,  General Counsel of the Department of Defense and  General Counsel of the U.S. Air Force.  He is a  partner in the Litigation Department of West Paul law firm.
Jeh was buried alongside his parents and two brothers at the family cemetery in Nashville.

For information about the Jeh Vincent Johnson ALANA Cultural Center Matching Gift Challenge, contact Tim Kane at [email protected]; and for more on the Center’s renaming, visit the Vassar website to read the full story.