BRISBANE, Australia — Almost every room and hallway of the Australian city of Brisbane hotel has been damaged after it was turned into a de facto immigration detention center for the federal government, the property owners claim.

It’s been four days since the last group of asylum seekers was removed from the Kangaroo Point Central Hotel and Apartments after spending about a year living there under government-ordered detention.

The group of 19 men brought to Australia for medical care were abruptly relocated on April 16, hours after the hotel’s owners reclaimed the site.

They allege their tenant repurposed the hotel — without permission — by renting its rooms to Serco, which helps run immigration detention sites for the government. 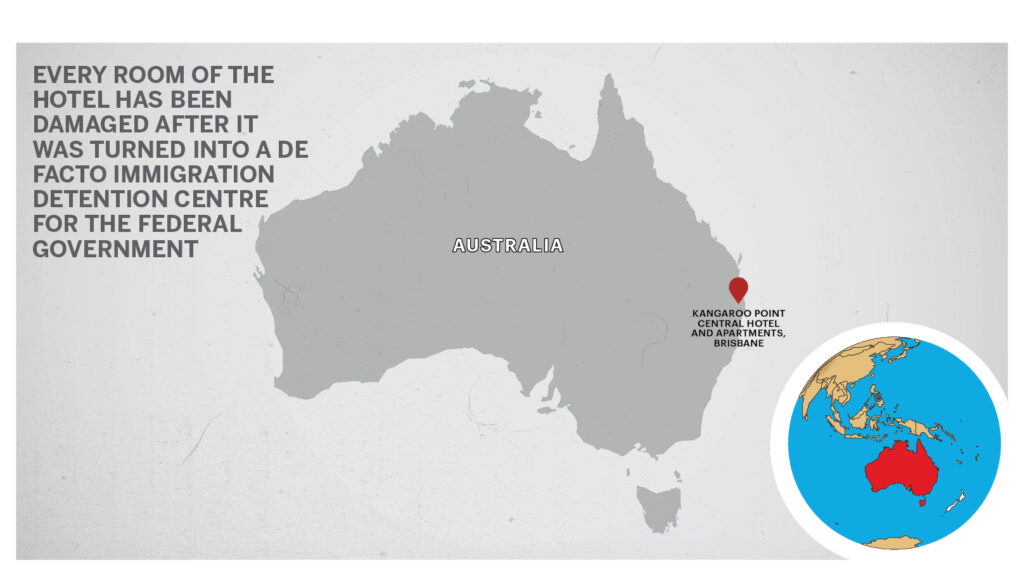 Matthew Allen and his family members are still trying to assess the scale of the damage but estimate it could amount to AUD 1 million ($772,065.0).

The damage is worst in a four-story accommodation tower. Security doors leading out to balconies have been clumsily secured with additional locks. Some windows have been screwed shut and cannot be opened.

There are holes in walls, plaster and paintwork are extensively damaged, and kitchens, bathrooms, and carpets are dirty. They have not been cleaned for some time, despite some of the rooms being occupied recently as April 16.

Televisions and furniture have disappeared. Curtains are gone. Indoor furniture, including bedside tables and chairs, has been dragged into communal hallways and sits alongside oddly-located washing machines.

The swimming pool is murky and outdoor areas are carpeted with cigarette butts.

Allen – a director of one of two family trusts that own the property – has accused the tenant of disguising what was happening at the property.

“We had to figure out for ourselves what was going on,” he said on April 20, claiming the parties had impeded access to the site for inspections.

When the owners were finally allowed on-site, inspections were limited to small sections of the property.

“What should have been an all-day inspection was all over in 15-20 minutes,” Allen said.

Any lingering questions ended some time ago, when security fencing went up, and every access point was suddenly under guard.

“Serco erected gates, and we immediately said remove them because they were not approved, in the lease, to be there,” Allen said. “The response from the tenant was it was an operational request by Serco and that it would save them money to have perimeter-style fending.”

What had always been a family-owned hotel for travelers had been turned into a full-blown detention facility, with food vans arriving daily to serve queues of asylum seekers who lined up in the car park to get their meals.

Conference rooms were repurposed to recreational spaces for detainees, which reportedly numbered 120 at one point.

The erected fencing even prevented a restaurateur who leased a venue on the hotel site from accessing waste bins and his cold room. That business eventually folded.

About a year ago, protesters supporting the detainees began to stage a regular protest outside the hotel. At vocal rallies, they attacked the government for locking up asylum seekers brought to Australia for medical care from offshore detention sites in Nauru and Papua New Guinea.

The trusts that own the hotel are now involved in legal action against the tenant. The tenant has not commented anything in response.

The detainees moved on April 16 were the last of those who called the hotel home for many months.

They have since been flown to Melbourne, where they are once more being housed in a hotel. This time it’s the Park Hotel – an example of what the government calls APODS (alternative places of detention) rather than existing detention facilities.