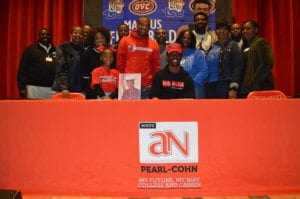 NASHVILLE- Marcus Fitzgerald Jr. is usually a quiet and reserved young man that lets others speak for him. This past Wednesday, he was all smiles and thankful for those that helped him along the way. The much “ballyhooed” point guard from Nashville made it official that next year he will be playing for Head Coach Brian “Penny” Collins at Tennessee State University.

“I feel great, this is a great moment for me,” said Fitzgerald Jr. “Coach “Penny” has been my guy since eighth grade. He’s doing a great job of changing the program. I can’t wait to get on campus.”

This year Fitzgerald Jr. will be playing at his father Marcus Sr.’s alma mater, Pearl-Cohn High School. The Fitzgerald name is legendary at the North Nashville school. His grandfather,

“I am extremely proud that Little Marcus is carrying on the tradition,” said Maurice Fitzgerald. “another Fitzgerald at Tennessee State University which has done a lot for me. So I am very thankful, very humbled and will be very supportive of “Penny”. I am waiting on some residuals because I was the one to give him his nickname.”

Fitzgerald Jr.’s arrival at Pearl-Cohn instantly makes the team a favorite to win the state championship in Class 2A. In his sophomore year at Brentwood Academy, he won a state championship alongside current Cleveland Cavalier Darius Garland. Last season, Head Coach Terry Cole’s team made it to the quarterfinals of the state tournament. Fitzgerald will be joined be Division 1 prospect Tyrone Marshall, sharpshooter Miquan Tucker and guard Antonio Anthony. That nucleus has people around town talking about how this team matches up with some of the all time great teams in Nashville’s history.

“It feels really good to have Marcus here,” said Marshall. “It feels good to have a guard here so all I will have to do is run the floor and he can get it to me. He is a leader on the court and can direct us. We must play as a team. It is all about defensive. Coach Cole has a running and conditioning.”

Off the court, Fitzgerald Jr. has a 3.0 grade point average and scored a 22 on his ACT as a sophomore. He credits his whole family and community for him being who he is. His mother and aunt are also graduates of TSU. Pearl-Cohn is a stone’s throw away from the campus.

“I am happy to see that I can continue the legacy here at Pearl-Cohn then at TSU. I want to also thank Coach Cole and Pearl-Cohn for welcoming me in. I have business to take care of and that is bringing a state championship here. Every time I go in the gym I see my uncle’s jersey and my grandfather’s pictures. That is a reminder for me to push hard.”
Collins has revamped his team this year with only two players returning from a 9-21 campaign last year. So far this season, TSU is 2-1. On Tuesday, Collins got his first signature win defeating Lipscomb University 79-78 on a last second shot by senior point guard Michael Littlejohn. Their only loss came on the road losing to UT Chattanooga University 59-58. In the game, TSU only shot five free throws and Littlejohn missed most of the game due to injury. With Fitzgerald Jr. signed, things are progressing well for Collins. Collins expressed his enthusiasm in a prepared statement.

“I am extremely excited to add Marcus Fitzgerald, Jr. to our 2020 class. He is exactly the type of student-athlete I envisioned to sign when I received the job here at Tennessee State. He is a winner, a thinker and a high-character person. His parents have done an unbelievable job raising him and he come from great stock. His grandfather is an alumni and Hall of fame coach right here in Nashville – Maurice Fitzgerald, who currently coaches at Hillsboro High School. Marcus will help lead this program to new heights and we are looking forward to him helping continue TSU’s rich basketball history.”

Miss TSU Plans to Keep Students Engaged Despite Coronavirus Pandemic  By Emmanuel Freeman NASHVILLE, TN (TSU News Service) — The coronavirus has disrupted much of the educational environment and greatly cut down on extracurricular […]