NASHVILLE, TN — In America there’s a fervor for the Civil War that glorifies one side of the story while ignoring its atrocities. It’s a common argument: “heritage, not hate.”

The problem is the two aren’t mutually exclusive. There’s so much heritage for the South to be proud of, but slavery and treason are stains on our history.

Journalist Connor Towne O’Neill set out to reckon with history in his book “Down Along with That Devil’s Bones.” Traveling to places speckled 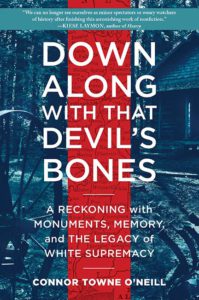 with the glorification of this antebellum antagonist O’Neill found that, despite his northern roots, the South’s history plays a much larger role in our nation’s identity.

Many times these statues were built decades after the Civil War’s end, often popping up as backlash to undermine Reconstruction and the Civil Rights Movement.

Certain parts of the region have specific “heroes.” In the heart of Tennessee, that person is Nathan Bedford Forrest, Confederate general, slave owner and trader and first Grand Wizard of the Ku Klux Klan.

One calamitous caricature depicts Forrest on horseback flanked by Confederate flags and is so laughingly hideous that it’s been featured on The Late Show with Stephen Colbert and Last Week Tonight with John Oliver. Built by Jack Kershaw, a sculptor, League of the South founder and attorney who challenged the official account of Dr. Martin Luther King, Jr.’s assassination, it sits on a patch of privately-owned land off Interstate 65, its clashing silver and bronze figure greeting travelers on their way into Nashville.

About 40 miles south in Murfreesboro, you can find Forrest Hall at Middle Tennessee State University, a college with a culturally diverse student body. Just down the road from it is the town square, featuring site markers describing Forrest’s 1862 raid in the Battle of Murfreesboro

against federal soldiers with the goal of freeing his Confederate compatriots being held at the courthouse. The building is guarded by “Johnny Reb,” a stand-in for Confederate soldiers that was erected by the Daughters of the Confederacy in 1901.

Johnny— or, ironically, “The Guardian of Peace” as he’s officially known in Murfreesboro— stands with rifle in hand, eyes focused on the horizon of East Main Street as if defending the town from an impending army. Or perhaps he’s keeping watch on the unmarked former slave market that sits at the corner of a nearby intersection.

It’s telling that markers were installed to lionize the Confederacy’s actions there while ignoring the former slave market that’s now a building that bears no mention of its origin.

In Memphis, the general’s statue sat above the remains of Forrest and his wife. It was removed from Health Sciences Park and the plot of land it inhabited is now owned by Memphis Greenspace. An agreement between the land’s new owners and Forrest’s descendants will allow the transfer and internment of their remains to the Sons of Confederate Veterans.

O’Neill also visited Selma, one of the most important sites of the Civil Rights Movement. It also happens to be home to yet another Forrest memorial.

“Selma’s important for understanding the conversation now because I think in a lot of ways the debate over the Forrest statue in Memphis presaged a lot of the conversations that we’re having, and I think the context in which that statue went up exposes a lot about what Confederate monuments mean and who their intended audience is,” O’Neill said.

The undermining of Reconstruction saw a return of racist power with the installation of Jim Crow laws to put them back under white supremacist rule and erect statues.

Selma, O’Neill explained, is an exception that proves the rule– a microcosm for the bigger story. Its Forrest memorial went up the same week as the city elected its first Black mayor. Though it wasn’t constructed during one of those eras of backlash, the message remained the same. “Putting up a statue of Forrest, that would be controversial anywhere. But to do it in Selma, an iconic city of the Civil Rights Movement and a majority Black city, it compounds the insult,” he added.

O’Neill is the producer of the “White Lies” podcast which delves into the miscarriage of justice in the murders of James Reeb and Jimmie Lee Jackson in the mid-1960s. White Americans have developed particular ways of coping with their bifurcated history through collective memory, he said. “It allows us to justify or bury deep down inside of us these darker aspects of our past. It’s a copout of course.”

In Selma the coping mechanism was conspiracy theories blaming Reeb’s friends for his death. Today that manifests in claims that deaths of Black Lives Matter activists were done by their fellows to frame the right.

The Confederacy stated its priority interest was in maintaining slavery not only for economic stability but also because they believed non-whites, particularly Blacks, were inferior and better off under the management of whites, who were inherently superior to all other ethnicities. The motive was only concerned with states’ rights insofar as preserving the “right” to own slaves.

“If we were to honestly hold ourselves to account for it, it would involve … a radical reconstruction of this country,” remarked O’Neill. “We’re not in danger of erasing our history. Our history lies elsewhere.”

“Down Along with That Devil’s Bones: A Reckoning with Monuments, Memory, and the Legacy of White Supremacy” can be found at bookstores such as Barnes and Noble as well as Amazon.com. O’Neill’s “White Lies” podcast can be found on Spotify.