NEW DELHI — Unlike tech-savvy musicians of today, Barkat Khan Manganiyar and his accompanists from the western Indian state of Rajasthan couldn’t take it to the internet to eke out a living during the pandemic.

So, the group spent the entire last year performing at weddings and private events in the neighborhood of their village Chattangarh near the city of Jaisalmer in Rajasthan.

“All of last year, we’ve not been able to perform [publicly],” the artist, who is among the handful of Manganiyar musicians that can perform Jangda (folk songs of war, valor, and love of the land) in its original form, told Zenger News. 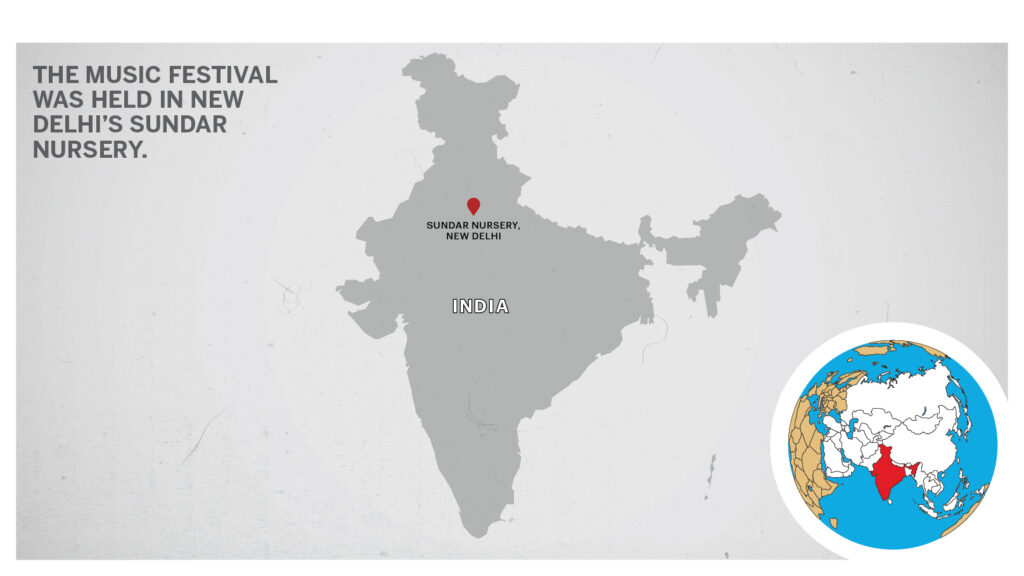 For many like the Manganiyars, 2020 did not offer too many avenues to make a living. In the absence of festivals such as the Jodhpur Rajasthan International Folk Festival, a not-for-profit roots music festival endorsed by the UNESCO, these artists who solely rely on public performances were largely homebound.

But this year’s March was different.

As the sun played hide-and-seek behind the Mughal minarets in New Delhi’s iconic Sunder Nursery, the Manganiyars got their kamaichas (stringed instruments), kartals (wooden clappers), and dhols (kind of a drum) ready to play for the first time since the pandemic began last year.

The Classic Bagh Festival, brought together by the Jodhpur Rajasthan International Folk Festival, the British Council, and the Aga Khan Trust for Culture, was special not just for music lovers but for artists such as the Manganiyars who took the stage after a year-long absence.

Khan, a member of the seven generations-old Manganiyar musician clan, said 2020 might be the first year in documented history when the clan couldn’t perform publicly. Thus, a chance to perform at this festival “was a blessing”.

“Our earning is only from such events,” Barkat said. “We consider the day as a godsend. It’s a huge thing for us.”

Holding four passports, Asin Khan Langa has traveled to almost every country with his group. And yet, when informed about the Classic Bagh Festival, the thrill was akin to his first-ever performance as a 11-year-old.

“We go and sing at people’s houses for special occasions apart from performing at events such as this one in India and abroad,” Asin told Zenger News. “But the past year was tough in the absence of any such source of earning. The invitation to sing at this festival was so special in these times.”

The 300 houses in the village are synonymous with musical virtuosity. They are broadly divided into the Sarangiyas who sing and play the Sindhi Sarangi (a stringed instrument) and Surnaiyas who play the Alghoza (a pair of fipple flutes) and similar woodwind instruments.

Asin has worked with Brian Molley Quartet, the renowned Scottish jazz ensemble, and is a part of the international band Maru Tarang that includes acclaimed Australian slide-guitarist Jeff Lang. Yet, Asin chooses to stay in his rural village to nurture the legacy of his artistic traditions through teaching.

As the Langa Ensemble began their performance, Asha Sapera, a well-known artist from Rajasthan who performs Kalbelia folk dance, mesmerized onlookers with her art.

The festival, an extension of the British Council’s Festivals for the Future skills development program, has enabled a series of UK-India music collaborations, including those between the Jodhpur Rajasthan International Folk Festival, Wales, and Northern Ireland.

A British Council research with the Federation of Indian Chambers of Commerce & Industry and the Art X Company recently tried to gauge the impact of Covid-19 on India’s creative economy and the sectors of performing arts, crafts, and festivals.

“The research confirms that 88 percent of the sector is MSME [micro, small and medium enterprises] in India and 90 percent of them fear the long-term impact of Covid-19 on recovery and resilience of the arts,” Jonathan Kennedy, Director Arts India, British Council, told Zenger News.

The findings state that “individual professionals and artisans are facing short-term hand-to-mouth existence and some in the workforce are leaving the creative economy and changing careers”.

It further notes that 16 percent of the creative sector is facing permanent closure.

Calling Indian traditional music “challenging, transformative, and cleansing”, Kennedy said it is important to resurrect arts and culture in the post-pandemic world.

“We hope Classic Bagh in some modest way brings people together to imagine what festivals and culture offer to us for the future.”

The festival unfolded on a nippy spring morning in New Delhi with Jasleen Kaur Monga’s Gurbani (recital of hymns from Guru Granth Sahib, the central religious scripture of Sikhism).

It concluded with a soul-stirring performance by the Warsi Brothers, a Qawwali group consisting of brothers Nazeer Ahmed Khan Warsi and Naseer Ahmed Khan Warsi, along with eight accompanists. Qawwali is a form of Sufi Islamic devotional singing.

The venue of the festival, a 90-acre park with restored Mughal-era monuments, is a haven for many in the capital city seeking a slice of freshness amidst the isolation. Time chose the park as one of the 100 world’s greatest places to visit in 2018.

Monga, whose mellifluous voice was in perfect harmony with the birds greeting early morning visitors to the park, gave a public performance for the first time post the pandemic.

“It was a new experience for me,” Monga told Zenger News. “I am feeling blessed that I was chosen to sing Gurbani in this unconventional setting and got a chance to connect with an audience.”

As artists such as the Manganiyars, Asin, and Monga await more such platforms, music lovers are looking forward to enjoying live music again — in nature’s lap.