“Shayla’s Catch,” the melodramatic romance, written by author Sonya Jenkins, was released via Amazon Prime Video October 15 and is now streaming for audiences to view as a “First Look” project. “Shayla’s Catch”takes audiences on the journey of Shayla (Shakari Gault), a young lady who falls for the heart-thumping enchantment of Calvin ‘CK’ 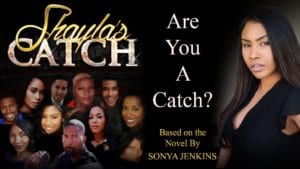 Moore (Malachi Mutakabbir), one of the most popular and highest-paid wide receivers in the NFL. “Shayla’s Catch”is a valid and timely depiction of the competitive nature of American sports mixed with drama, romance, money, intimacy, broken hearts, and hope. The film stars actress and singer Shakari Gault, daughter of former NFL star and Super Bowl Champ, Willie Gault. Shakari, who was featured in an episode of “Everybody Hates Chris” and has performed extensively on stage, began training for acting as a child at Beverly Hills Playhouse with Gloria Gifford and with Troy Rowland in Burbank. The film also stars singer/songwriter and actress Amina “Buddafly” Pankey, a former “Love & Hip Hop New York “ alum, and Hollywood stuntman and actor Malachi Mutakabbir, among other talented actors.

Getting Shayla’s Catch adapted into a screenplay has been a long-time goal of Jenkins, who is also a magazine publisher, entertainment journalist and actress. “I first pitched Shayla’s Catchas a screenplay at the Jamerican Film Festival in 2003, before I even finished writing the novel,” Jenkins recalls. “A television producer and screenwriter at that film festival, Tina Andrews, whose film, Why Do Fools Fall in Love, I loved when it was at the box-office years prior, told me she loved my pitch. Her enthusiasm about Shayla’s Catchgave me the extra zeal I needed to finish writing my novel.”

Jenkins also had an opportunity to pitch “Shayla’s Catch”to director Robert Townsend the following year when she directed a few actors in a skit in front of Townsend and a group of filmmakers in Atlanta. “Seeing Shayla’s Catchin movement was instrumental during the entire process of writing the novel. I would write chapters, read what I had written out loud, and imagine the characters in motion. Sometimes I would act out the scenes myself. I became each character throughout the process, especially the main character, Shayla. I envisioned Shayla’s Catchas a film from the start.”

When Jenkins was a Stand-In and marcher in the Academy-Award nominated film “Selma” in 2013, Award-Winning Director Ava DuVernay gave her an opportunity to direct a small scene of actors marching while singing an old-time hymnal. The scene did not make it in the final cut of “Selma,” but Jenkins says the directing experience gave her an adrenaline rush and made her realize that wearing the “Director’s Hat” was attainable and intriguing.

“I had worked on many film sets over the years, watching the intricacies of film-making, so working for Ava DuVernay as a Stand In during “Selma,” and then her giving me the opportunity to conduct a scene was key in my overall belief that I could always do more than the task at hand. After working with Ava and marching beside Oprah in SelmaI wanted to grow to new heights creatively. The experience changed my life.”

Jenkins has also worked with many other influential filmmakers and actors. She was a background artist in several Tyler Perry directed TV and film productions, a recurring salon patron in director Lee Daniel’s “Star” on Fox, as well as the “Coca-Cola Girl” (a featured background role opposite Cicely Tyson) in Lifetime TV’s “The Trip to Bountiful.”

“Cicely Tyson was one of the first African-American women I recall seeing on the big screen, so being on set with her and literally being stared down by her in a scene was surreal for me,” Jenkins says. “Working beside her allowed me to incorporate the professionalism, work ethic and attentiveness she exuded on set into my own life.”

While releasing “Shayla’s Catch”via Amazon Prime Video wasn’t Jenkins’ original plan, she feels that taking the path was the most feasible one for her in order to continue showing and telling her story. “In storytelling, you have to show and tell, so the Amazon publishing platform not only allowed me the opportunity to tell and sell my stories as an author, but Amazon Prime Video allowed me the opportunity, as a filmmaker, to show my story,” she says. “When you can actually see your work via any outlet, it motivates you to keep going the distance.” Jenkins reiterates “Shayla’s Catch” via Amazon is a “First Look” and is still a work in progress.

“Improving the project, pitching it, seeking investors and executive producers, finding a home for it, dealing with release agreements and doing research are all jobs – hard jobs. I’ve brought on scriptwriters and directors for consultation from time-to-time. It’s a learning process, but while I’m learning, I’m continuing to press forward,” says Jenkins.

Jenkins believes “Shayla’s Catch”is relevant more today than it was when she first started writing the book two decades ago because it delves into self-esteem issues that plague many young women today, especially in our social media influenced society. “Raising the self-esteem of the younger generation is very important, but healthy self-esteem has nothing to do with having thousands and millions of social media followers or having a baller as a boyfriend or a husband,” she stresses. “Shayla’s Catch delves into what life can be like if one has the millionaire partner, the popularity, the beauty, but still struggles with self-love behind closed doors.”

While many authors sell their book projects to be re-developed, Jenkins also believes selling the rights to Shayla’s Catchis an option. “I have other stories to write, so I decided not to become too attached to any of my projects, although I will always consider Shayla’s Catchmy book and film baby.”