By Nicole Chavez and Holly Yan

All it took was a man and a truck to inflict the deadliest terror attack on New York City since 9/11.

A 29-year-old man plowed into a crowd of bicyclists and pedestrians just blocks away from the World Trade Center Tuesday afternoon. Mangled bicycles littered the street as medics rushed to the victims.
Six victims were killed instantly. Two others died later. And more than a dozen are trying to recover as the country grapples with yet another terror attack. 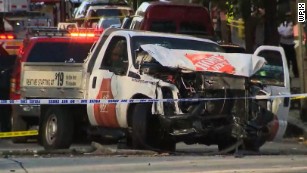 “This was an act of terror, and a particularly cowardly act of terror aimed at innocent civilians, aimed at people going about their lives who had no idea what was about to hit them,” New York Mayor Bill de Blasio said.
The suspect has been identified as Sayfullo Habibullaevic Saipov, according to two law enforcement sources. The Uzbekistan native — who came to the US legally in 2010 — allegedly drove a rented pickup truck onto a busy bike path, crashed the truck into a school bus, then stepped outside of the vehicle brandishing imitation firearms.
Saipov was “radicalized domestically” in the US, Gov. Andrew Cuomo said Wednesday morning.
“The evidence shows — and again, it’s only several hours, and the investigation is ongoing — but that after he came to the United States is when he started to become informed about ISIS and radical Islamic tactics,” Cuomo said.
“We have no evidence yet of associations or a continuing plot or associated plots, and our only evidence to date is that this was an isolated incident that he himself performed.”

Four people on the school bus had minor injuries after the truck crashed into it, a police official said. After hitting the bus, the driver exited the truck and was shot by police while displaying imitation firearms, according to the NYPD. 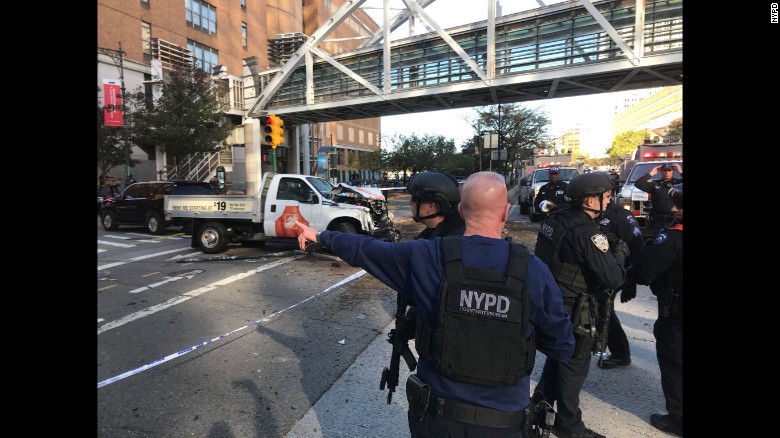 New York City police work in Manhattan after a rental truck drove down a busy bicycle path and struck people on Tuesday, October 31. At least eight people were killed and nearly a dozen were injured in the incident, which is being investigated as terrorism, according to multiple law enforcement sources. A suspect is in custody.
The driver of the truck drove the wrong way down the West Side Highway bike path for several blocks, according to two senior law enforcement sources at the New York Police Department. After striking multiple people, the driver hit a school bus and wrecked the truck, an NYPD official said.
Four people on the school bus had minor injuries after the truck crashed into it, a police official said. After hitting the bus, the driver exited the truck and was shot by police while displaying imitation firearms, according to the NYPD.

New York City police work in Manhattan after a rental truck drove down a busy bicycle path and struck people on Tuesday, October 31. At least eight people were killed and nearly a dozen were injured in the incident, which is being investigated as terrorism, according to multiple law enforcement sources. A suspect is in custody.
The driver of the truck drove the wrong way down the West Side Highway bike path for several blocks, according to two senior law enforcement sources at the New York Police Department. After striking multiple people, the driver hit a school bus and wrecked the truck, an NYPD official said.
A police officer shot Saipov in the abdomen, but the suspect survived and underwent surgery Tuesday evening.
Saipov has been linked to social media accounts that contain ISIS-related material, a law enforcement official said Wednesday morning. The official also said Saipov has been somewhat cooperative with FBI and New York police investigators who questioned him in the hospital overnight.

Here are the latest developments in the attack: 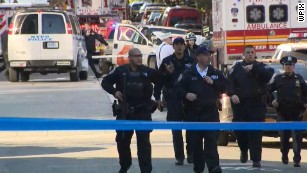 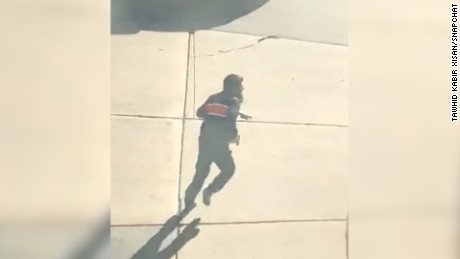 Officers were able to talk to Saipov before he went into surgery, but it was unclear if he told them anything, a law enforcement source told CNN.

Just over six months ago, Saipov began driving for Uber in New Jersey, the company told CNN. He passed a background check and did not have any rider complaints about his safety as a driver, according to Uber.

He once listed his occupation as a truck driver, his marriage license shows.
Saipov had multiple run-ins with law enforcement in several states, online records show. He had traffic citations issued in Missouri and Pennsylvania and was arrested by the Missouri State Highway Patrol in October 2016 after failing to show up in court for a misdemeanor offense.
He paid a $200 bond, which he forfeited when he didn’t show up in court for his next hearing in November. A guilty plea was entered on his behalf. 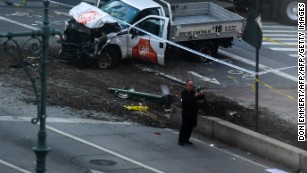 “The Argentine Government expresses its sincere condolences for the death of Argentine citizens Hernán Diego Mendoza, Diego Enrique Angelini, Alejandro Damián Pagnucco, Ariel Erlij and Hernán Ferruchi which occurred as a result of the dramatic terrorist attack in New York this afternoon,” the ministry said in a statement.
They had traveled to New York from Rosario, a town nearly 200 miles northwest of Buenos Aires, to mark the 30th anniversary of their graduation from the Polytechnic School, a technical high school in Rosario.
A sixth Argentine national who was also part of the group was injured during the attack. He was out of danger, the ministry said, but as of Tuesday night, he was still recovering at New York-Presbyterian’s Lower Manhattan Hospital.
“Deeply moved by the tragic deaths this afternoon in NY,” Argentina’s President Mauricio Macri tweeted. “We put ourselves at the disposition of the families of the Argentinian victims.”
Didier Reynders, deputy prime minister and foreign affairs minister for Belgium, said a Belgian national was also among those killed.

President Donald Trump offered condolences to the victims’ families and praised first responders who rushed to the scene. 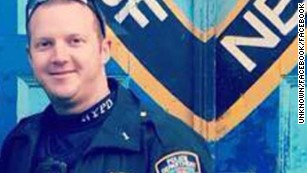 “We offer our thanks to the first responders who stopped the suspect and rendered immediate aid to the victims of this cowardly attack,” Trump said in a statement. “These brave men and women embody the true American spirit of resilience and courage.”
Trump also tweeted that he’s ordered the Department of Homeland Security “to step up our already Extreme Vetting Program” and also accused Sen. Chuck Schumer of not being tough enough on immigration.
But Mayor de Blasio said “the last thing we should do is start casting dispersions on whole races of people or whole religions or whole nations. That only makes the situation worse.”
De Blasio also warned against stereotyping all Muslims as extremists.
“Anyone who wants to come into this country should be very thoroughly vetted as an individual,” he said. “But the minute you start generalizing it, especially to a whole religion, then unfortunately we’re sending the exact negative message that a lot of our enemies want and the terrorist wants to affirm — that this nation is somehow anti-Muslim. We’ve got to do the exact opposite. We’ve got to show we respect all people in America. That’s about as American of a value as there is.”

The tactic of turning an ordinary vehicle into a lethal weapon is becoming increasingly common.
In 2014, an ISIS spokesman called for lone wolf attacks using improvised weaponry. “If you are not able to find an IED or a bullet, then single out the disbelieving American, Frenchman or any of their allies. Smash his head with a rock or slaughter him with a knife or run him over with your car or throw him down from a high place or choke him or poison him.”
Since 2014, there have been 15 vehicular attacks in the West by jihadist terrorists, killing 142 people, according to a count by New America, a nonpartisan research institution. Those figures include Tuesday’s attack in Manhattan.
For the past few years, New York police have reached out to vehicle rental businesses to warn them about possible terror threats.
“We did extensive outreach to the truck rental business. We visited over 148 truck rental locations in this area,” said John Miller, NYPD deputy commissioner of intelligence and counterterrorism. “The industry has had a high level of awareness on this matter from the NYPD.”
Miller said that if a company is suspicious of a would-be renter, they usually delay or simply deny a rental to let police investigate.
In Tuesday’s incident, the suspect drove a Home Depot rental truck he drove from New Jersey, Miller said.
A spokesman for Home Depot confirmed one of the company’s rental trucks was part of an incident in lower Manhattan and said the company is “cooperating with authorities” in the investigation.

By Lauren Fox Tennessee Republican Sen. Bob Corker said Tuesday he will retire at the end of 2018. “After much thought, consideration and family discussion over the past year, Elizabeth and I have decided that […]