Nashville, TN — The hit stage play “Je’Caryous Johnson presents SET IT OFF” based on the critically acclaimed film by the same name is back by popular demand, arriving in Nashville Sun., March 15 at 4 PM at The Tennessee Performing Arts Center (TPAC), 505 Deaderick Street. 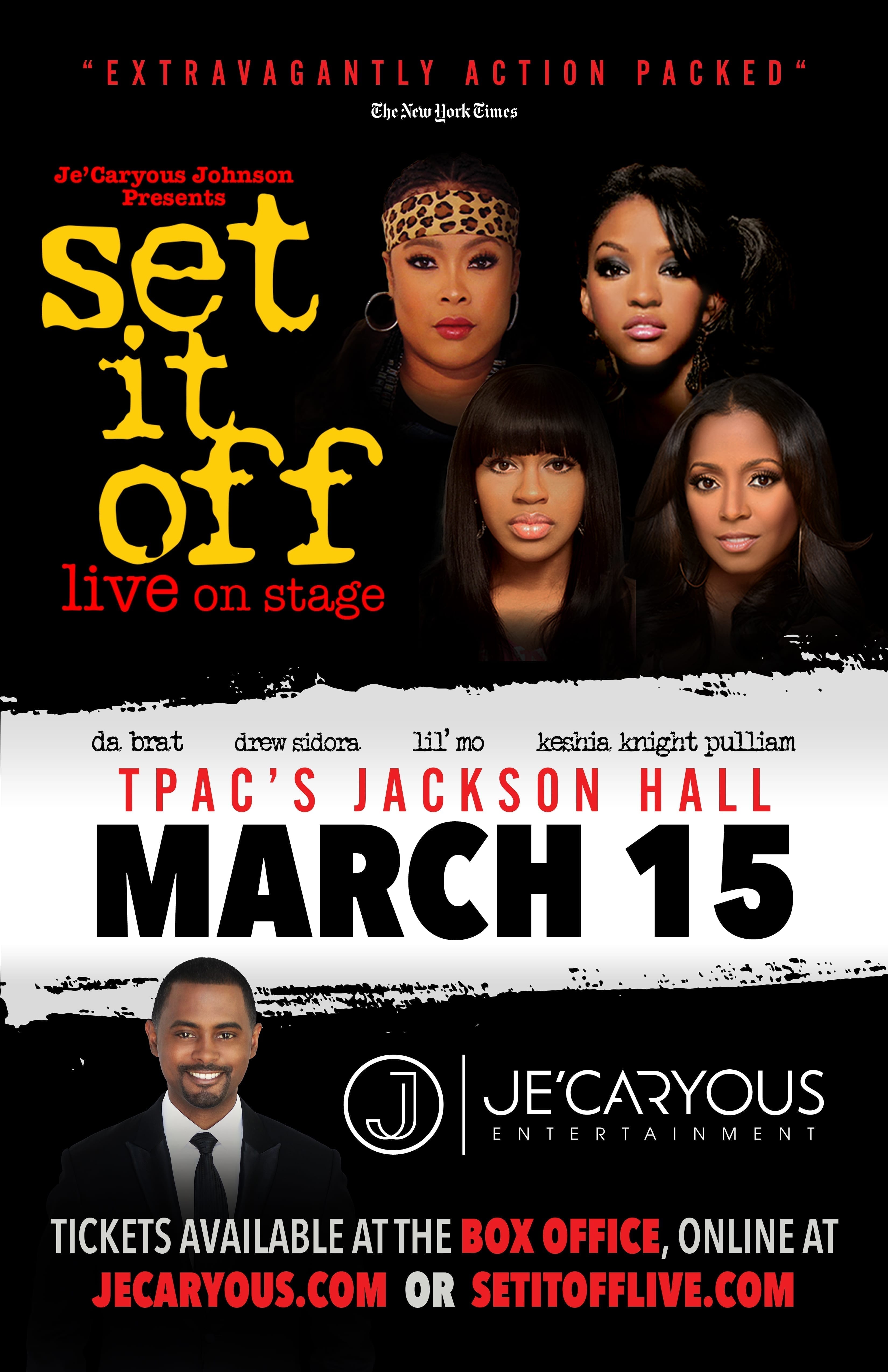 “SET IT OFF” is written, directed and produced by Je’Caryous Johnson, who has toured over 21 stage play productions to sold-out crowds and written over 37 plays. In 2017, Johnson adapted “Two Can Play That Game” starring Vivica A. Fox and most recently launched “Redemption of A Dogg,” which chronicled a character built around the persona of Snoop Dogg set against a backdrop of his greatest hits and his chart-topping Gospel album, Bible Of Love.

Johnson is also currently set to premiere on stage and tour “B.A.P.S.,” based on the cult classic movie. The play centers on four childhood friends who spent a lifetime struggling to move away from the mean streets of their neighborhood. The system stole their d

reams and now the four are determined to steal them back. As one grapples with the possibility of losing her only child, the foursome find themselves on the edge of desperation. With their world in turmoil and their backs against the wall, they decide to seek their fortune – literally. Flush with cash, they discover that “mo’ money equals mo’ problems.” The stage adaptation of “SET IT OFF” kicked off its inaugural run Spring of 2018 to sold out audiences from coast to coast, receiving critical acclaim and reviews from fans and setting Twitter and social media blazing. Actors and singers everywhere wanted to take part in this groundbreaking show and theatrical movement. “This tour is simply an

answer to the fans that asked me to bring ‘SET IT OFF’ back,” said Johnson. They loved the show so much, raved about the show to all their friends and simply wanted to experience it again. As long as the fans continue to want it, I’m going to continue to tour it. I have the best fans and want to give them the best.”

“So many people can relate to their innate wants and desire to have a better life and not be judged based on their environment or where they come from,” said Johnson. “The longing for more that the women of SET IT OFF desired is something people everywhe

re can identify with and want to feel and experience. As we continue to launch touring companies of SET IT OFF, it’s my goal that the cast is also a diverse reflection of women everywhere, just like the women in this play. The cast we have assembled this time around is an image of the best of who humanity is, all with unique and different experiences in life that they will also powerfully bring to each of their characters on stage.”

The movie was based upon the screenplay by Takashi Bufford. It boasted one of the most superb casts ever assembled in a movie – Queen Latifah, Vivica A. Fox, Jada Pinkett Smith and Kimberly Elise as well as an equally powerful, platinum selling, chart-topping, cut straight to heart musical soundtrack. Songs from hit makers like En Vogue, Brandy, Tamia, Bone, Thugs-n-Harmony, Busta Rhymes and Goodie Mob to legendary music icons like Gladys Knight and Chaka Khan were all featured on the SET IT OFF soundtrack. For its time and even today, the movie and music was a black culture phenomenon. “Without a

doubt, SET IT OFF has been the most heralded, trailblazing show to hit the urban theater market ever. What we experienced with SET IT OFF in 2018 was mind blowing,” stated Johnson. “From the type of action and movement on stage to the music composition, special effects and reveals, it was nothing short of jaw dropping and was the first piece of my care

er that stretched the limits of what urban audiences had ever seen. I want to make sure that SET IT OFF continues its ground breaking legacy with each tour.” Da Brat is one of the most lyrically laced female rappers of all time and the first female solo rapper to go platinum. From hit songs like “Funkdafied” to “Ladies’ Night (Not Tonight)” with Lil’ Kim, Left-E

ye of TLC, Angie Martinez and Missy Elliott to the remix of Mariah Carey’s “Always Be My Ba

by” and “What Chu Like” with Tyrese, Chicago raptress Shawntae Harris, better known as Da Brat, is one of the most successful, multi-faceted female entertainers today. From being the ultimate performer on stage to hosting a hit nationally syndicated talk show on the FOX Network, DISH NATION, a hit syndicated radio show “The Rickey Smiley Morning Show” and even starring in and making guest appearances on numerous TV shows like WE TV’s Growing Up Hip Hop: Atlanta and Lifetime’s The Rap Game, Da Brat’s star continues to shine bright.

Keshia Knight Pulliam is the quintessential Hollywood Belle. She grew up right before our eyes as the iconic “Rudy Huxtable” in the hit cult classic TV show, The Cosby Show. She would continue to become a part of TV history when she played “Miranda” on five

seasons of Tyler Perry’s House of Payne and then as “Candace” in the hit movie Madea Goes To Jail. Most recently, she received a star on Tyler Perry Studio’s Walk of Fame for her role in House of Payne. She is also the host of her weekly podcast Kandidly Keshia and also launched a spice line, Keshia’s Kitchen.

Lil’ Mo debuted on the music scene as Missy Elliott’s protégé and contributed guest vocals to some of Elliott’s work, most notably the record-breaking “Hot Boyz.” After that Lil’ Mo shot to the top of the charts with hits like “Ta Da”, “Superwoman Pt. II”, “4Ever”, “Hot Girls”, and her debut single “5 Minutes.” Lil’ Mo would go on to pen chart-topping songs like the Grammy-nominated “Put It on Me” and “I Cry”. She would also have great success on the reality TV scene, with starring roles on TV One’s R&B Divas: Los Angeles, VH1’s Marriage Boot Camp: Reality Stars and VH1’s Love and Hip-Hop.

Driven, charismatic and an undeniable talent, Marquita Goings has brought to life some of the most dynamic characters on screen. Upcoming, Marquita can be seen on TV One’s “Coins for Love,” BET’s “Open” and BET’s Season 2 of the hit show, “American Soul.” Most recently, she made a guest star appearance on Tyler Perry’s soon to be announced series. After landing her first motion picture, Marquita soon rose to the ranks of top casting agents and got special appearances on such hit series as “Star,” “Dynasty,” “Tales” and “Saints and Sinners.” Marquita is most known for her role in TVOne’s “Behind The Movement,” the 2019 NAACP Nominated film for Outstanding television movie, limited-series or dramatic special. A story about the late great Rosa Parks, told from her perspective.

Tickets are on sale now for the Nashville engagement. For more information on the tour and tickets, visit jecaryous.com or Ticketmaster.com. For questions, call (615) 782-4040.

Trending With The Tribune Presents The Chancellor Of Vanderbilt University, Nicholas Zeppos PT. 1

Pandemic Won’t Silence the Music in This Nashville Teacher

By Marta W. Aldrich Chalkbeat To Alicia Engram, music is social. Inside of her elementary school classroom in Nashville, Tennessee, she trains her music students to sing in unison, perform as a group, dance together, […]