NASHVILLE, TN — Tanya Acker, one-third of the bench on the Emmy-nominated series “Hot Bench” recently released  “Make Your Case: Finding Your Win in Civil Court” in which she gives tips and insights into the litigation process.

“People tend to romanticize the legal process and think it’s easier, but they can also be intimidated by it and not understand why certain things happen,” she said.

The book isn’t an exhaustive explanation of the law but rather a guide of the many twists and turns that occur during a court battle, 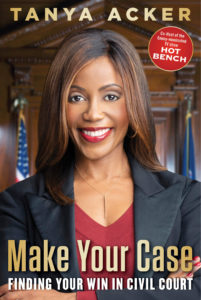 Acker added sometimes what a litigant may think is an open-and-shut case can wind up taking years. “Don’t waste your time,” she said. “Go into the process realizing that you may not get all of what you feel you’re entitled to.”

“I think one of the things that people should really think about as they’re approaching a conflict with somebody is how to avoid court,” Acker advised. “Sometimes you’ve got to fight in court but exhaust all other options first.” Try to solve your issue interpersonally if possible, but if you’re set on getting the courts involved “make sure you protect your interests,” she added.

Oftentimes the presiding judge will recommend litigants to at least try to work something out before pursuing the case but the option to settle is still on the table after the process begins, she said. Additionally, mediators may be available and judges can direct parties to information on resources, with some state bar associations being able to offer guidance on cases.

The COVID-19 pandemic is exacerbating existing problems while creating new ones.  With eviction moratoriums and CARES Act funds ending at the end of the year, Acker said she expects a “domino effect” of litigation as people find themselves in situations in which they may not know how to find a resolution and seeking redress in the courts.

Acker’s syndicated television series “Hot Bench” premiered its new season Sept.15. She also hosts a podcast that can be found at www.tanyaackershow.com or on iTunes.