MINNEAPOLIS, MN — On the fifth anniversary of the passing of the incomparable Prince, Paisley Park which was his famous home and personal music sanctuary and stage, opened their doors for fans to pay tribute and celebrate his life.

The Paisley Park Atrium  was open for free visitation on April 21. Fans requested advanced free tickets online via Eventbrite and in return were allowed a once in a lifetime experience with ‘The Beautiful One.’  The ticket provided scheduled 10 minute time slots to stand in front of Prince’s Paisley Park inspired urn while Purple Rain played softly.

Paisley Park was created as a place of love and peace, where there are not any rules or limitations for creativity. It first opened in 1987 and was Prince’s home for 30 years.

In true Prince fashion, I was able to share some Purple Love myself by giving some of my extra tickets away to newfound Prince friends.

One of those new friends was Darrin Denmark, who flew in from Orlando, FL.

He shared, “I took the Ultimate Tour last year and the year before I did the VIP tour. Just having the opportunity to be in a place where his 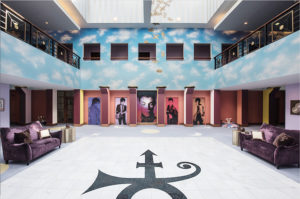 GREATNESS resides was my favorite part of being at Paisley Park…”

Prince fan, DJ L’Monte’, founder of the DJS of Craft ( nationwide Masonic Affiliated DJ Coalition) drove  six hours from Chicago to visit Paisley Park and  to honor Prince.  He shared, “I’ve been a fan since “Controversy” when I first started learning how to DJ. I would use that song on a 12-inch remix. April 20th was my first time at Paisley Park. The tour was fulfilling. I loved that he designed his home around recording studios, concert halls, and party rooms and would work on his music late nights.”

In the past, Prince opened his home often to fans for surprise select concerts. He hosted the Minnesota Sphinx women’s basketball team when they won the championship with a hotcakes party. He also created albums with celebrities coming to his studio like Lizzo and Alicia Keys.

Before entering the Beautiful One’s world there is one important Purple rule you must follow: You must turn your cell phones off and keep them secured.

Prince was always very mysterious and private that way and he wanted those around him to be in the moment. ( I learned this first hand back at his 2015 concert when I met him in Louisville there were signs saying no cameras or video. )

You really step inside Prince’s world and leave yours behind when you walk in.

The Paisley Park tours are highly fulfilling providing you real life behind the scenes moments and lifetime memories.

The tours can be scheduled online at PaisleyPark.com or in person. Visitors should schedule a visit to Paisley Park if you appreciate music, history, art, creatives, are a fan or just really want to learn about his life and legacy.