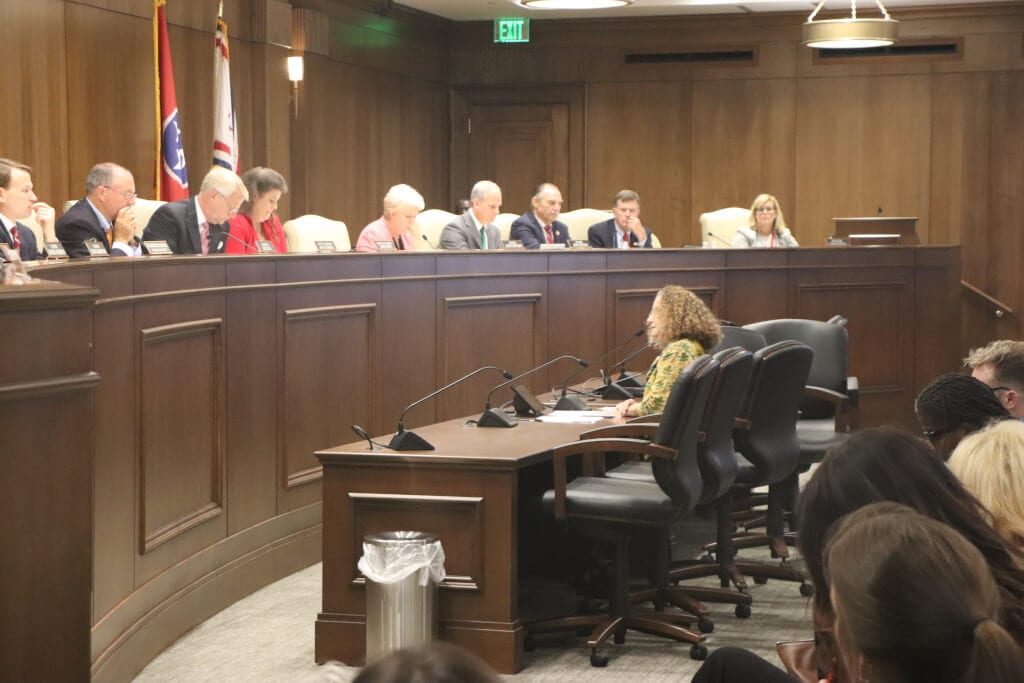 “Make no mistake the ACLU and others will sue if this bill is passed into law. We will sue and we will win,” said Hedy Weinberg Director of ACLU Tennessee.

“We need to make sure we build a ruling court. How do we do that? We reelect President Trump and we reelect a majority in the Senate. That is it. That’s how we build a willing court,” said Jim Bopp, an attorney with the National Right to Life Committee.

Bopp has argued 14 cases in the Supreme Court and won 9. He noted a long-running debate within the pro-life movement between a prohibitionist strategy flatly banning abortion and an incremental one simply restricting it. He said the prohibition argument has been unsuccessful because a woman’s right to choose has well-established legal precedent.

However, the Tennessee General Assembly has passed various bills that have forced abortion providers to shut down and reduced abortions by 40% in Tennessee. Bopp said state by state, and little by little, pro-lifers are laying the groundwork to overturn Roe v Wade. But it’s been a long slog.

One Tennessee heartbeat bill failed in 2017. Earlier this year, a House bill passed that outlawed abortion once a heartbeat is detected. The Senate version by Sen Mark Pody (R-Lebanon) amended the House bill by holding life begins at conception, and if passed, the law will effectively ban all abortions in Tennessee. It will be voted on next year.

“Make no mistake the ACLU and others will sue if this bill is passed into law. We will sue and we will win,” said Hedy Weinberg Director of ACLU Tennessee. Weinberg noted that Kentucky, Mississippi, Ohio, North Dakota and Arkansas have passed fetal heartbeat bills but courts have blocked them and the court costs were more than $1 million. She said SB1236 will wind up costing Tennessee taxpayers more than $100,000.

“We’re trying to construct a law that won’t get us into court on the losing side,” McNally said.

Other established abortion opponents like Right to Life and Tennessee’s three Catholic bishops do not support Pody’s bill either. They want an end to abortion but think a heartbeat bill is the wrong way to go about it.

The Judicial Committee study group, six Republicans and two Democrats, listened to legal experts, doctors, and advocates debate when life begins and when a person has constitutionally protected rights.

Pody’s bill assumes a person’s life begins at conception and that an unborn child has a right to life under the 9thAmendment. A woman’s right to choose is based on the 14thAmendment. Someday the Supreme Court could take a case to settle the competing constitutional claims of those two positions. However, unless Associate Justice Ruth Bader Ginsberg retires and is replaced by a right-to-life conservative justice, Roe v. Wade will continue to be established precedent and hard to overturn.

A baby can survive outside the womb at about 26 weeks and legal experts on both sides of the abortion debate say that is when an unborn child is considered “viable”. Heartbeat laws that ban abortions at conception or after 6 weeks have no legal precedent. “Pre-viability laws will not be upheld,” Bopp said.

Ironically, that is the same argument Weinberg used to defend Roe v Wade which grants a women’s right to abortion on demand. Weinberg said fetal heartbeat bills are just political ploys by Republican candidates taking the most extreme positions on abortion in order to outdo their rivals.

However, laws against fetal dismemberment or laws requiring parental consent to get an abortion are chipping away at Roe v Wade. Anti-abortion laws that restrict but do not outright ban abortion have dramatically reduced women’s access to abortion in a number of states, including Tennessee.

They will likely continue to do so until the Supremes hear a case that argues Roe v Wade is a bad precedent and the high court either picks another standard to settle the matter or upholds Roe v Wade once and for all.