But several lots are now empty, the modest houses gone, and the families who lived in them have moved away.

Tonya Wade-Moody still lives in one of the remaining homes. And she is plenty angry.

“Where are the affordable homes? All of these people are being kicked out, put out of their homes.  You’re bringing in these high-priced condos/ apartments. The average person can’t afford that,” said Tonya Wade-Moody. She spoke to the City Council Dec 4, 2018.

She gave much the same speech to the Planning Commission Dec 13, 2018. She handed them a petition signed by 75 people in the neighborhood who didn’t want the multi-story apartment complex on the end of their block and didn’t want tall and skinnies looming over them either.

“We don’t want it in our area and I wish you would listen to us. We don’t want that and we don’t need it,” she told the 10-member Planning Commission.

The commission approved the re-zoning plan. Dozens of projects like it are green-lit every month. The Nashville Next plan is supposed to regulate growth but unchecked development is eating up North Nashville like a cancer.

Not a single person on the 41-member City Council voted to preserve the old neighborhood so people could keep living where they raised their children, grow old, and leave their house to the next generation.

Aside from bad policy and the officials who implement it, there are economic pressures causing the black diaspora. Homeowners are being offered top dollar for their homes by speculators who tear them down and replace them with tall and skinnies or change the zoning to build multi-family units on the same and adjoining lots.

“There’s nothing strange about that,” said Property Assessor Vivian Wilhoite. Home prices in Nashville have been steadily rising for a decade. According to Zillow, a real estate database company, the mean home price in Nashville is $262,400; the mean rent is $1,558. Zillow ranks Nashville the 8th hottest housing market in the U.S.

“People are willing to pay more so they don’t have to drive into town. If a buyer is willing to pay a certain price and a seller is unwilling to sell for one penny less, that sets the value for the entire neighborhood,” Wilhoite said.

But there is something strange going on. Banks used to routinely gouge or outright deny home loans to blacks in red-lined neighborhoods because it was considered a poor financial risk. The practice was widespread and blatantly discriminatory. Just the opposite is happening now. Banks are quite willing to make construction loans to people who want to build in older black neighborhoods and to make home loans to people who want to buy what they build.

Urban pioneers who are richer, whiter, and younger are settling into new homes in East and North Nashville that are no longer affordable to the people who once lived there.

Wilhoite is quite right to point out that home sales don’t happen without a willing buyer and a willing seller. African Americans who own their homes in North Nashville may be cash poor but they are land rich. Single family homes on small lots in Moody’s neighborhood are not worth as much as the land they sit on. And so many black seniors are cashing in.

“Dirt is not cheap,” said Michael Leidel of Metrostudy.com, a real estate data collection and research firm. And neither are the homes being built all over town.

Leidel is tracking new construction projects in Nashville with at least four units and a home-owners association. In North Nashville, there are 17 current projects. Without amenities the builders list prices range from $250,000 to $800,000.

Building higher density housing offers a better return on investment and the Nashville Next community plan allows for multi-family housing along major corridors. There’s only one problem: working families can’t afford them.

The mean household income in Nashville is $43,847. You’d have to make about $80,000 a year to buy any of those new market-rate homes. The residents of North Nashville are being surrounded by hostile construction projects. (see map). In the gussied-up jargon of Nashville Next that is called “best land use”.

Affordable housing is not in Wilhoite’s job description. “We don’t have the concession on

reducing the value of property just because you want to build affordable housing,” she said.

“If you’re talking about organizing, you’re not talking to no rookie,” said Butler. He said people don’t always know how the system works and it’s an organizer’s job to find out.

“You can’t be a leader if you don’t know anything,” he said.

People can protect their neighborhood from unwanted development by creating an historic or conservation overlay. There is an application process through the Metropolitan Historic Zoning Commission. But people have to agree they want one and then get together to make it happen.

“Sometimes it can be overnight,” and Butler snaps his fingers. “Most of the time you have to build it for a long time.”

Easy money is behind the gentrification that is displacing longtime residents in North Nashville. The city’s failure to keep developers in check and insist they build more affordable homes is sabotaging equitable development in North Nashville. The area’s Community Plan goes on and on for 85 pages about how great things could be. But wishing doesn’t make it so.

On Wade-Moody’s block, eight lots sit empty where families once lived. One of them found a place off Gallatin Rd. and another is renting in Bordeaux. If Wade-Moody and her neighbors get organized they might still stop a 30+ apartment complex right behind them on 27th Ave N.

John S. looks at a pile of rubble on his block that used to be someone’s home. “It was here the day before yesterday. They just finished tearing it down and want to build that bullshit right here on 26th.,” he says, and points to the multi-story apartment complex at the end of the street.

Just a few blocks away, vacancy signs hang in the new apartment complexes along Charlotte Ave. “Nobody’s living in them,“ he scoffs. “It makes no sense,” he says, and heads home. 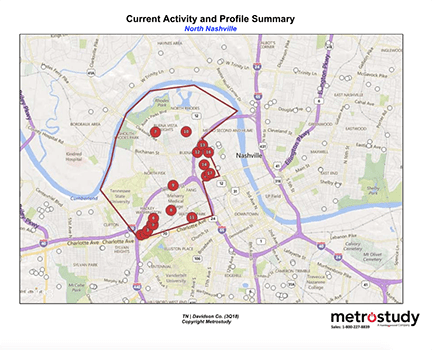 This article was written with the support of a journalism fellowship from the Gerontological Society of America, Journalists Network on Generations and The Commonwealth Fund.