NASHVILLE, TN – A coalition of community groups says Nashville can be saved if the airport expansion project uses union labor and Community Benefits Agreements. People from Stand Up Nashville met in the historic Mount Zion Baptist church last Thursday to talk about getting better economic opportunities for residents in Nashville’s six Promise Zones.

Promise Zone is an euphemism for a pocket of poverty and high crime in the “It” city where people do not live lives of quiet desperation. They are too busy trying to survive. Think about “Escape From New York”, the Hollywood movie set in the future, when all of Manhattan is an unregulated dumping ground for undesirables.

About 121,500 people live in the six zones. The poverty rate is 37.6 percent and unemployment is 14 percent, 11 percent higher than the city’s overall unemployment figure of 3.7 percent.

Many of the people who reside in those zip codes work fulltime and can’t pay their bills. They are living testimony that the wealth and prosperity from Nashville’s unprecedented growth has passed them by. Shut them out.

“I work in a community center in South Nashville. We run the largest emergency food bank in Nashville and Tuesday, Wednesday, Thursday from 11 to 1 you can come get an emergency food box if you need it,” said Odessa Kelly. She is co-chair of Stand Up Nashville’s economic equity and jobs task force.

“I would say it’s 50 -50 where people come in and they are taking off work to come and get an emergency food box,” she said.

“What person who works between 35-40 hours a work should have to come in to get an emergency food box?” Kelly asks.

“People are hurting in Nashville. That is the reason why we need Stand Up Nashville.”

Kelly said she knew fifteen people who work at the new Sounds stadium, a much-heralded city project that ran $31 million over budget. Taxpayers footed the bill. 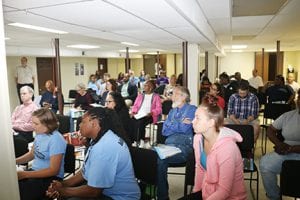 “Guess where they come to get an emergency food box? They come to the Napier Community Center because they need that money they worked hard to get to pay for rent. We haven’t even talked about bills yet. We are talking about rent,” Kelly said.

“God forbid if you have kids,” she added.

Then Kelly asked the crowded room if they knew anybody who worked at the Music City Center.

“I know several (who clean it). And they all have to come into my building to get an emergency food box.”

Last Thursday was a dark and stormy night. A tornado warning sent 60 people down to the church basement. The sirens and flood warnings continued to go off and the rain poured down in buckets. Late arrivals were drenched when they came through the door.

What they found when they got there was a ray of hope, surprising considering how bad things are for Nashville’s working poor and the unemployed. But activists laid out the problem clearly and they presented a blueprint for the city if only its elected officials would see the wisdom of it.

Whether those officials will convince Mayor Barry to forge community agreements between Metro, community groups, and the developers who build here remains to be seen.

The basic idea is to provide skilled workers through paid apprenticeships with “high road” contractors who won’t use temp agencies, or steal wages, who offer health insurance and disability insurance, and who pay a living wage.

In Nashville that is about $21 per hour or $44,000 a year for a couple with one child. Right now fulltime construction workers make an average of $15 per hour or about $30,000 a year. They are building the boom in the “It” city and can’t afford to live here.

And that’s for fulltime work. Part time work or minimum wage jobs don’t come close to the $19.85 per hour average wage in Nashville.

According to Anne Barnett, the city is remaking itself as a new age mecca of business & entertainment but it’s doing it on the backs of the working poor and underemployed. She says there is a better way.

“We know that if we get a success at the airport it’s really going to change the way development happens in Nashville,” she said.

“It’s going to set a new threshold for the things that we want in our city.”

Barnett, who works for the Central Labor Council, said more transparency is needed to change the way Nashville does business. “We need more public input when these deals are being made, not afterwards,” she said.

She said if construction projects don’t benefit local people and local communities then the city council should not pass them. Barnett explained that Community Benefits Agreements is a good way to bring opportunities to local people.

“Oftentimes they include good jobs with benefits, sometimes the developer is going to pay into an affordable housing trust, or support transportation or something like that,” she said.

What do developers get out of it? Barnett said a successful workforce pipeline puts highly trained workers on the job who have fewer accidents and finish projects on time. That saves money and it’s an antidote to the school to prison pipeline.

“A lot of folks can go through basic training and go out to a job site but they won’t have what they need to be anything other than a day laborer. Those are entry level jobs not career jobs,” she said.

She said Nashville needs apprenticeship programs, once common in the building trades that pay younger workers to train on the job and learn from career journeymen who make good wages and can afford to retire with dignity.

“The end result of this successful pipeline is that we have highly trained workforce, we have a safe workplace, and career job that move folks into the middle class,” she said.

Jackie Sims with Democracy Nashville is very involved in the airport expansion project. It will take between five and seven years to complete and when its done there will be permanent operations jobs there.

“Lots and lots of jobs are going to be attached to a project that big,” Sims said.

Sims has been talking to the airport authority and urging them to hire high road contractors. The project is being done with mostly private money, so Sims says the community has no real leverage to enforce community benefits agreements.

“But we have their ears. We are on the agenda for the next meeting. We put a packet together and will have an opportunity to show them that packet and meet privately with them about some of the things that will come to Nashville with some form of a community benefits agreement,’ Sims said.

The Airport Authority meets the 3rd Wednesday of every month at 1 o’clock. The meetings are open to the public.

“I encourage you all to please come and attend a board meeting and get an opportunity to see what ‘going on behind the scenes as these huge projects are taking place in Nashville.”