NASHVILLE, TN — After a slow start in losing the first set, the Fisk University Lady Bulldogs (4-12, 1-0 A.I.I.) prevailed over the Crawley’s Ridge College Lady Pioneers (1-6, 0-1) 20-25,25-17,25-14,25-8 in Association of Independent Institution Conference action at Fisk University. The key to the victory was adjustments that were made after the first match which Fisk committed 11 errors. They only had 11 errors combined for the last three sets.
“I actually didn’t say much (after the first set),” said Fisk head coach Jess Enderle. “They knew they didn’t play well so it wasn’t anything more to bring attention to. Lex (assistant coach Alexis Emanuel) made some line adjustments, gave them some adjustments and moved on.”

The Lady Bulldogs used the powerful combination of junior Skye Faucher and freshmen Nyah Goss who combined for 33 of their team’s 54 kills. Faucher led her team with 20 points and Goss added 18. Goss’ gave her double-double. Sophomore setter Brittany Henderson also had a double-double accomplishing 42 kills and 13 digs. Freshman Bobbi Crosby coming off missing games due to an injury and sophomore Cornysia Island both added eight kills to support the winning effort.

“We came together like a unit and we got the job done,” said Goss. “Skye is one of biggest mentors on the court. I hope to be like her when I become a junior. We need Bobbi in all aspects of the game. She is one of our biggest cheerleaders and her serves are A1.”
The victory was the third in a row for the Lady Bulldogs.

Fisk will travel on Saturday to play two games in Owensboro, Kentucky. Freshman Janaya Allen has been steady all year. Her 25 digs led Fisk. The team also got a huge contribution off the bench from senior captain Sydnei Patton who had 14 digs and played with a lot of emotion.

“I came off the bench which I am ok with,” said Patton. “It gave me a good warmup to see what was going on, on the court. We lost the first game, so I knew what I had to do when I got out there. The first game we were a little bit lackadaisical, but we knew this was a conference match so as soon as we hit the court in the second game, we knew exactly what we needed to do.” 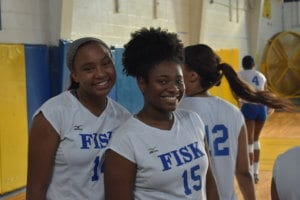